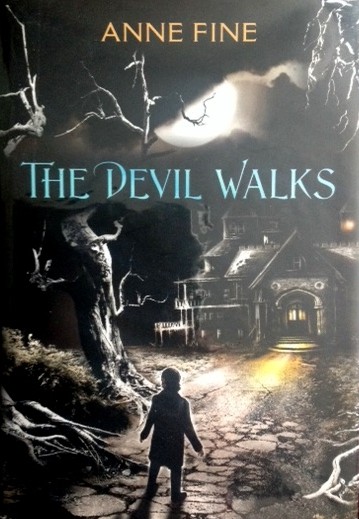 The Devil Walks by Anne Fine

Anne Fine is an astonishingly versatile writer – she can produce equally excellent books for children, young adults and adults without seeming to miss her step at any point. It’s unnerving.

The Devil Walks is aimed firmly at the young adult market, although there are plenty of older readers who will enjoy the creation of this Gothic tale. There are plenty of echoes here of the conventions that will be familiar to those who enjoy the Victorian and Edwardian melodramas that have a hint of the supernatural about them. But it’s worth saying that this isn’t just an exercise in pastiche – it’s a story that accepts the conventions but uses them skilfully to tell a tale that is full of jeopardy and barely suppressed violence. However, it’s also reassuring for the reader that the tale is told by the central character – Daniel Cunningham – which at least guarantees that he’s come through his travails well enough to be the narrator.

It’s a book that’s very hard to talk about without spoiling the plot – or at least deflating some of the tension – so I’m going to be very light touch about this.

When the book opens we discover that Daniel is a young boy who has been kept away from the rest of the world by his mother. He knows nothing of his past, has no friends and believes that this is because he is ill. His only pleasure in life is a meticulously built dolls house with dolls he uses to construct his play-reality.

Then one momentous day he is liberated from this life by a well-meaning doctor who fosters him – his mother is taken to an asylum and the search for any other family members begins. Daniel and the youngest daughter of the doctor who has fostered him bond over playing with the doll's house but the discovery of a sinister doll that had been hidden in the house gives Daniel the first inkling that there may be something sinister going on with this toy, which is his only possession.

Following his mother’s suicide, Daniel’s life is cast into further turmoil by the discovery that he has an uncle he knows nothing about and that he lives in a house that is clearly the model for his dolls house. But why is this uncle so keen to have Daniel come to live with him? What’s happened to the rest of his mother’s family? What is the secret of the graves at the bottom of the line of trees known as The Devil Walks?

Well, that’s it from me as far as plot is concerned – if you want to know more, I’ll leave you to find out how it all plays out.

Behind the Gothic thrills of the story, Fine is a good enough novelist to do more that spin a good yarn. As the late lamented novelist, Mal Peet notes in his review of the book for The Guardian:

“The Devil Walks functions perfectly as a page-turning chiller (it would translate wonderfully into film or television) but it also operates at other levels. This is a book that, without seeming to, subverts the keystone notions of family, home and nurture……Only by razing what he was and what he might have become does Daniel have the possibility of freedom.”

Copies of the book in both hard and paperback are absurdly cheap online and can be bought for well under five pounds and would be perfect for an adventurous reader of 10+.