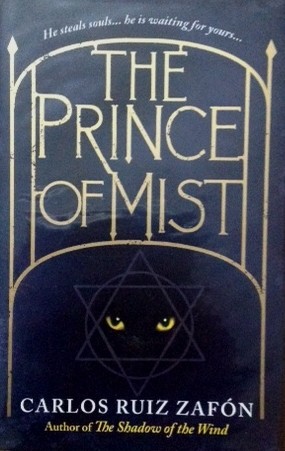 The Prince of Mist by Carlos Ruiz Zafon

Zafon, who died at the tragically early age of just 55 in 2020, might be better known to many readers as the author of the best-selling biblio-fantasy thriller, The Shadow of the Wind (2001). The book invites us to visit the Cemetery of Forgotten Books and this conceit binds together a subsequent series that are both sequels and prequels. The atmosphere of a historic and fantastic Barcelona shrouded in mystery and an evil legacy of the Civil War permeates the books, making them irresistible escapist reading.

However, Zafon’s debut novel was The Prince of Mist, written for teenagers in 1993 and which contains many of the qualities he would hone and develop into the later Shadow of the Wind. Set in an unnamed location in 1943, the Carver family move to a small coastal town to avoid the worst ravages of the war. The move takes place on the thirteenth birthday of Max Carver, who along with his two sisters, Alicia and Irina, are less than impressed by his watchmaker-father’s enthusiasm for the beachside house he has managed to find for them.

From the outset a sense of impending mystery and doom slowly grows across the book – a clock runs backwards and a sinister cat (echoes of Bulgakov’s The Master and Margarita)  attaches itself to the family before Max stumbles on a walled graveyard full of statues that in the confusing mist seem to morph and move of their own volition.

As the dreams of the children become disturbed by increasingly frightening dreams of crazed clowns (shadows of Stephen King’s IT here), Irina who has grown disturbingly close to the mystery cat has a frightening experience that sends her reeling down stairs and into a coma. All this happens as Max and Alicia spend time with a new friend they have found, Roland, who introduces himself as the grandson of the local lighthouse keeper.

Roland and his grandfather, Victor, turn out to be pivotal to the mystery and to the developing horror and its through them that we start to uncover the supernatural story of the evil, possibly satanic, Dr Cain – the Prince of Mist of the book’s title - who is a genuinely frightening creation.

This is very much a book that requires any reviewer to take care over just how much they reveal because the power of the story requires the detail to build and unfold, revealing itself in unexpected and disturbing ways. Because of that I’m not going to uncover more of the plot or the breathless conclusion which is full of jeopardy and insipient tragedy.

This is the perfect book for teenagers who like the old-fashioned skills of immersive storytelling. In many ways this feels like a young adult novel that is a cocktail of adult horror and more traditional children’s adventure tales and would be a really excellent bridge into his later adult work and into his Cemetery of Forgotten Books.

You’ll find both hard and paperback copies of this book for not much more than five or six pounds and it would make an excellent present for a teenage thrill-seeker.