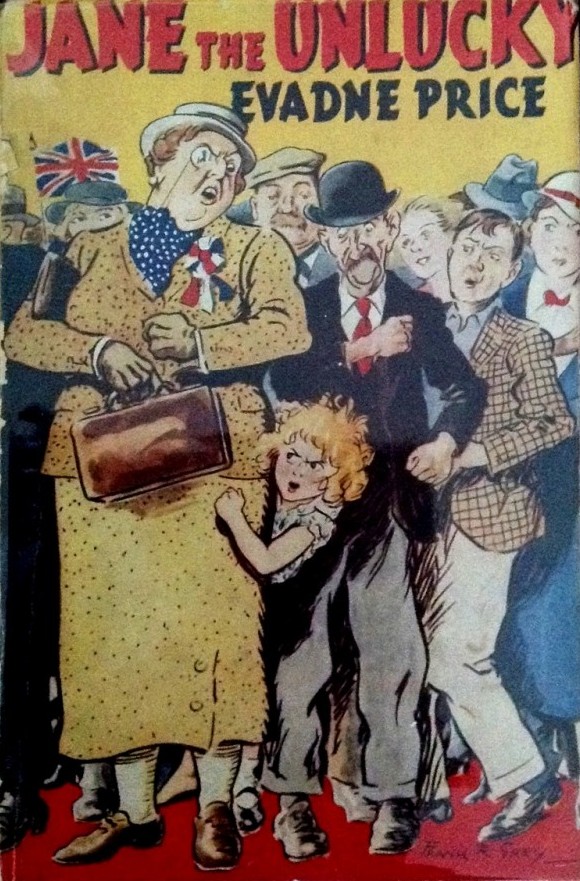 Evadne Price and the Jane series

One of the most pleasurable things about obsessively hunting for second hand books in some unpromising and uncongenial junk shops is that you occasionally turn up something that takes you by surprise. This was the case when I found a dusty but basically sound copy of a book called Jane the Unlucky with a fantastically colourful and alluring dust jacket (pictured) written by Evadne Price. I couldn’t quite place the author’s name but it rang a distant bell – somewhere deep in my past I’d heard that name before – and I’d never heard of ‘Jane’ despite the fact that this copy suggested it was one of a popular series. Clearly this was worthy of some further research.

So who was Evadne Price? Quite a character it seems although her biography is not always straightforward because she clearly spent plenty of time reinventing her life story. Born in 1888, she spent her early years in Australia before moving to the UK in 1910, only to move on almost immediately to the USA for two years before returning again to Britain to become a jobbing actress.

Her acting career was followed by a stint as a journalist and coincided with a third marriage and becoming a war correspondent for The People in 1943. As well as journalism Price became a prolific author across a range of genres, including the Jane Turpin stories for younger readers.

One look at the cover of the book I found will tell you that the Jane books were designed to cash-in on the popularity of Richmal Crompton’s William books but with the twist of making the young chaos-creator a girl rather than a boy. The device of making an angelic-looking young girl a mischievous trouble-maker seems to be the only bit of originality; from what I’ve read, all the books in the series seem to follow a set of plotlines that are very much what you’d expect if you’re at all familiar with William.

The often useful Wikipedia tells us:

“Jane's family was created by Evadne Price to contain five members - Jane's father, mother, elder sister, Jane herself and baby Henry. Jane's father and mother are usually referred to in the books as "Mr. Turpin" and "Mrs. Turpin", although it is revealed in later books that their names are Henry and Marcia respectively. Jane's elder sister Marjorie ("Marge" to Jane) was a young woman, and hence interested in boys - a fact often exploited to generate situation comedy. Her exact age has never been stated, but since she doesn't seem to go to school like Jane, it can be assumed that she is at least eighteen and possibly older (early twenties perhaps). "Baby" Henry appears later on and was once kidnapped by Jane, Pug and Chaw. Aunts and great-aunts (like Great-Aunt Catherine), usually rather formidable characters, are depicted in the books to have regularly visited the Turpin household. Jane lives under threat of being sent to be "moulded" by her maternal grandparents.”

I have definitely never come across this series before – I can only assume they didn’t make the transition from the immediate post-war years to the 1960s when I was young enough to encounter them and I don’t recall ever hearing any radio adaptations. So why does the name of Evadne Price have a sort of ghostly familiarity?

Well, it seems that Evadne Price had another sideline – as a television and magazine astrologer. She made a number of appearances on a daytime tv programme called Lunchbox that was hosted by the popular Noele Gordon and which was watched on a regular basis by my mother as she went about her other household tasks. I expect  the name of Evadne Price must have crept into my mind at that time.

I can’t imagine I will be seeking out any more of Jane’s tales but I’m glad to have found this because it opens a little window on my past and led me to the life of an author I’d otherwise have never explored.