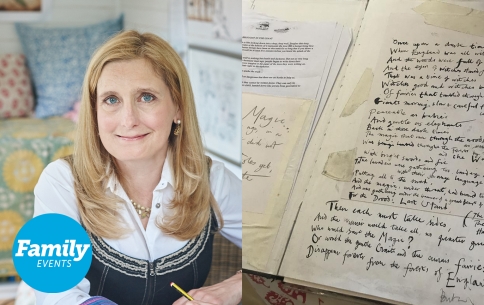 Cheltenham Literature Festival is always stimulating, but also very tiring for us elderly folk. So I was relieved to seat myself in a comfy chair in the Waterstones book tent by a display of books by Cressida Cowell, in order to kill a bit of time before the event.  I enjoyed watching excited children arriving all around me to see the latest Children’s Laureate do her stuff:

Then a rosy cheeked girl of about ten literally ran at the display, closely followed by a couple of smiling adults:

‘I’ve got that one! Can I get that one as well! There are so many! Do you think Cressida is actually in this shop?'

An older, serious looking boy carefully reached to select the latest book in the Wizards of Once series, took it down and examined it closely before holding it in front of him using both hands as he approached the till, as if it were a sacred object.

Behind him was a solemn looking girl of about seven who waited patiently for him to move and then reached for her own copy. She opened it and read for a few minutes, completely engrossed until her dad joined her. She beamed up at him: ‘It looks really good’!

The event was in the largest venue and was packed with children of all ages plus several adults. Although I was on my own, I felt myself being affected by the growing anticipation that fizzed through the place. Five minutes still to go and there was lots of bouncing up and down in seats and selfie-taking. I wondered how many of the children have read the books or who are here because they love the films? Not that it really mattered. Whoops of joy as Cressida Cowell walked on to the stage, a diminutive but clearly very energetic individual. She gave an engaging interactive performance using photos from her own childhood and reading extracts from some of her marvellous stories.

She seems to be committed to getting her central ideas about reading and writing across to whoever will listen; that children need time and space to be allowed to grow their imaginations. She explained that spelling and beautiful handwriting needs to be played down by teachers and parents in favour of encouraging them to write and draw without rules and creative constraints. The adults in the audience were certainly cheering her on, but I can’t help thinking that this must be a confusing message for lots of children who go to schools where they are told the opposite from a very young age?

She also made much of pleading with children to cherish the natural world and to spend time exploring and researching all about it. It was interesting to hear that she has been shaped by her own idyllic sounding childhood experiences that included spending summer holidays on an otherwise uninhabited island off the West of Scotland. Her father used to be Chairman of the Royal Society for the Protection of Birds and was a close friend of David Attenborough, so she had quite an unusually privileged background!

I really hope that she successfully enthused her young audience to write and draw more freely because she came across as a Children’s Laureate who is determined to be noticed and to make a difference.

The queue for signing was predictably huge and I’m not sure if everyone was lucky enough to get their books signed. I rather think that she was going to be there for several hours because she chatted at length with everyone that approached the table (including me) and was very happy to be photographed next to her adoring fans. I was lucky to be near to the front of the queue because I had  left the event a few minutes early anticipating this rush of people. As I gathered my signed books into my bag, I felt very encouraged to see children waiting who were holding several books, including the children that I had overheard a couple of hours earlier. Their faces were still shining with enthusiasm. Hooray for young booklovers everywhere.