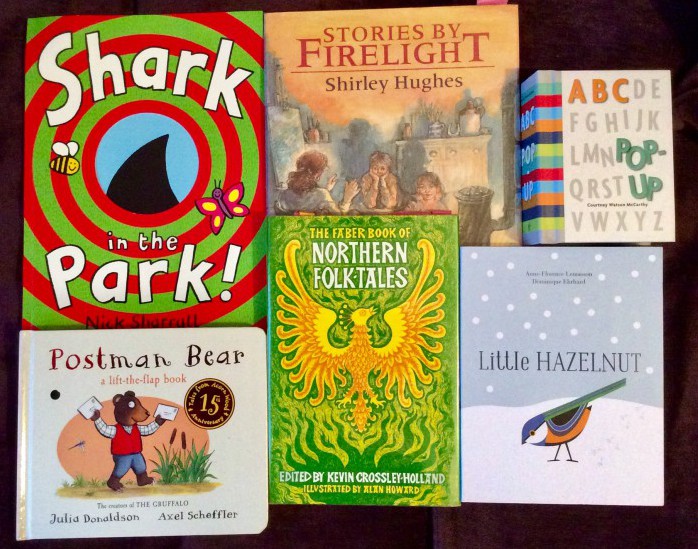 Book event variety is the spice of my life

People who know me well will not be surprised to hear that I am thoroughly enjoying every event that I do for The Letterpress Project. What a luxury to be able to browse through my collection of children’s books, make an appropriate selection and then spend time talking about and showing them to people of all ages.

Because of my enthusiasm, I am sometimes inclined to arrange too many events in close succession but it is so hard to say no to invitations from people who clearly share my love of books. Last week was a good example and although tiring, I had a great time again.

On Monday I went to spend time at Colwall Village Playgroup as I had been invited to read some stories with the under threes. As usual, I had to agonise over which books to take and how many to reasonably fit into my trusty trolley as I was travelling by train. I was met at the station by one of the organisers who took me to the very pleasant church hall and then had a lovely time chatting to parents and grandparents and playing with the delightful children. Snack time was particularly impressive as involved biscuits, fruit, toast and home- made smoothies. While some of them grazed over their food, I started my story time with children and their grown- ups. ‘ Shark in the Park’ by Nick Sharratt is always a big hit whenever I read it aloud because of the repetition, refrains and the suspense of the colourful pictures. Even the youngest babies seemed to be listening and waiting to see what was going to be revealed next on the turn of the page. It is always a bit of a gamble reading a ‘ scary’ story to young children when one isn’t aware of their personalities and one very sensitive girl was a bit frightened at first so needed reassurance. The well- loved ‘Postman Bear’ by Julia Donaldson, illustrated by Axel Scheffler was the other big success with several children confidently joining in to guess who was hiding behind the flaps as they were obviously familiar with the story. I shall be going back there again in a few weeks with a different selection – or maybe take those ones again as they were so well received.

On Tuesday I made my third visit to Perrins House in Malvern to read stories to some elderly residents. As with the young children, it is sometimes difficult to judge what might be suitable and even harder to judge body language in terms of reaction as many of them are to all intents and purposes unable to communicate. It might be wishful thinking, but I think I did detect a slight shift in the stillness of one lady who lay with her eyes closed beside me. I do hope that she enjoyed my reading of ‘ The Old Troll of Big Mountain’, a Swedish story from ‘The Faber Book of Northern Folk Tales’ edited by Kevin Crossley- Holland and illustrated by Alan Howard. I have used this one and others before and think that the very clear structure and rhythm of traditional folk tales might be comforting, and possibly familiar. I had a very positive response from another lady when I showed her the beautiful illustrations by Shirley Hughes in a story from the ‘Fireside Tales’. She smiled as I read it and said ‘cosy pictures’ softly when I had finished. Once again my soothing voice succeeded in sending another couple to sleep which is a result of sorts I suppose.  I’m hoping to make another visit next week and will probably use the same books.

A few days to get on with the more mundane side of my life cooking, cleaning and of course spending lots of special time with my grandson and then it was time for my keynote lecture at a Worcester University conference on Saturday. I had been invited to talk to Early Years and Working with Children and Families undergraduate students about The Letterpress Project with the overall aim of raising their awareness about the importance of books in children’s lives. I decided to use a tried and tested title for my presentation: ‘ Beautiful Books Build Brilliant Brains’ which meant I was able to take along lots of my favourite pop books as well as some picture books produced by smaller publishers that they might not come across in mainstream bookshops. My lecture followed one titled ‘Everyone Belongs: Inclusion, Equality and Diversity’ given by Caroline Jones, a renowned academic in the field of inclusion, so I tried to make a link. This wasn’t difficult as it is obvious that books can play an important part in constructing how people see themselves and how they see the world as well as helping to develop a sense of empathy.  The students were very responsive and several came to look at the book display afterwards and to talk about why they also loved books. It was encouraging to see such enthusiasm from practitioners and I am hoping that several will get in touch with me in the future so that I can go to visit their workplaces. Oh no – I see that I am in danger of filling up my diary too quickly yet again but how can I possibly refuse?