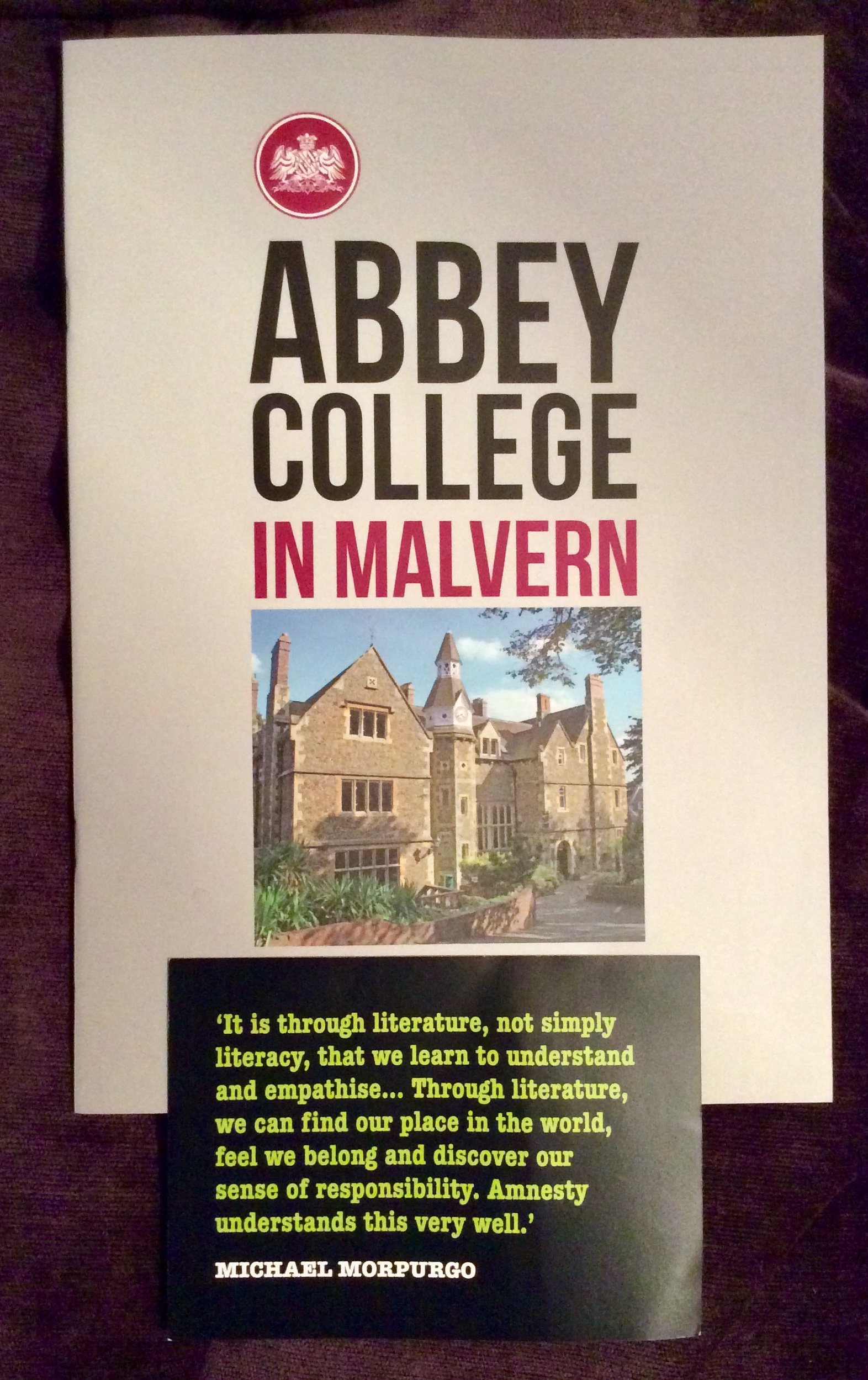 I don’t think that I have ever done an event in such an extraordinary building before. The oldest part of this long established fully residential UK Boarding School is part of a 70 acre campus that overlooks the Severn Valley. I was with my Amnesty speaker friend who used to work at the school many years ago and she pointed out the many interesting features of the reception building that looks like a small stately home clad in the distinctive Malvern stone.

We were there to talk to the international students aged 14 to 20 about how literature can help people to understand and empathise with the experience of asylum seekers and refugees. I have a particular interest in this subject and have talked about such books with many different audiences in the past. This was a bit different because the audience was made up of young people from many different countries of origin including Nigeria, Iran, Uzbekistan and Saudi Arabia who are studying a range of courses at the college. I was encouraged to see that several of the students came to browse my display of books before I started talking and seemed to be very interested in looking at the graphic novels ‘ Alpha’ by Bessora &Berroux and ‘ Habibi’ by Craig Thompson.

I had prepared a power point which unfortunately did not work and after a brief activity where they talked about what it might be like to have to flee their country, I plunged into showing them a few of the many books that I had brought along as examples.

I soon realised that, because of the wide range of languages spoken, it might be best to focus on showing them all a couple of picture books. ‘The Arrival’ by Shaun Tan is the quintessential wordless book about the experience of leaving a country behind because of oppression, making a long difficult journey and arriving in a strange new land. The powerful pictures transcend language and I was pleased to see that many of the students were visibly moved by the images. Next we looked at ‘The Island’ by Armin Greder with its brutal depiction of a naked, homeless stranger arriving on an island. The hatred of the people who live on the island is visceral and never fails to chill, especially as there is no happy ending to the story because they are clearly determined to keep him out.

As ever, the time went far too quickly but at the end several of the students came to the front again to spend more time looking at the books. It is always gratifying to be asked ‘Which one do you like the best?’  and ‘ Which one do you recommend?’ although I really struggled to answer both questions because I like all the books in my collection for different reasons. I strongly recommended ‘The Other Side of Truth’ by Beverley Naidoo because of its dramatic opening scene where the children’s mother is murdered before their eyes which sets in motion their dramatic escape from Nigeria  as unaccompanied asylum seekers. I told them a bit about ‘Refugee Boy’ by Benjamin Zephaniah and how it is a compelling story of terrible loss, love and hope. I suggested that ‘Chasing the Stars’ by Malorie Blackman might be an exciting read but was told that it looked ‘a bit too long’. As one young woman reminded me, fitting in time for reading is difficult because homework and revision has to take priority (possibly because the school principal was in earshot)!.  Gradually, most of the students drifted away and I don’t know whether I convinced them to perhaps buy some of the books or even to join the local library and borrow one. On the other hand, three girls stayed behind taking pictures of the book covers on their mobile phones so I really hope that they decide to try reading them for themselves, despite the homework and revision.