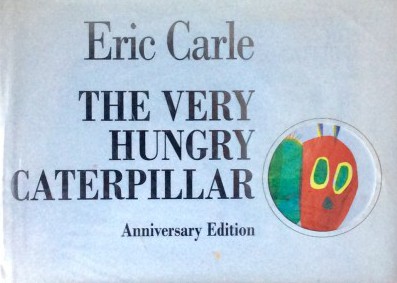 One of my dreams is to visit the Eric Carle Museum of Picture Book Art in Amherst, Massachusetts, USA and to see some of this artist’s paintings in all their original glory. They look impressive enough seen in the illustrations for his many picture books, but I would guess that his particular flamboyant style deserves a bigger canvas to be fully appreciated.

His informative official website http://www.eric-carle.com/bio.html  gives plenty of interesting detail about his life and works, so I will summarise this very briefly. He was born in Syracuse, New York in 1929 and always enjoyed expressing his ideas through painting and drawing. He moved to Germany with his parents at the age of six where he grew up and was educated, eventually graduating from a prestigious art school in Stuttgart. However he wanted to return to live and work in America and in 1952, he returned to take up his first job as a graphic designer at The New York Times.

He is of course best known for the iconic and innovative picture book ‘The Very Hungry Caterpillar’ published in 1969 which continues to sell over 46 million copies across the world and is now translated into 62 languages. But he has also illustrated and written more than seventy other distinctive picture books and he continues to enjoy painting and educating children about the importance of art.

So what is his enduring appeal? For me it is the combination of visible broad brushstrokes, layered collage effects and vivid use of colour that makes all of his illustrations so vibrant and textured. There are many echoes of artists like Gaugin, Chagall, Picasso, Klee and Matisse throughout his work, all of whom he admires. He apparently finds the colour yellow to be fascinating but very difficult to use as he has only discovered how to make four different shades. Despite this it shines out from nearly all of his books – often in the shape of a smiling sun. He is evidently a big nature lover because his subject matter often includes stories about the importance of taking care of animals and plants which he shows us in close detail as in one of my favourites: ‘ The Tiny Seed’ which shows the dramatic life cycle of a sunflower seed.

He takes his responsibility for creating beautiful books for children very seriously and as he explains in this interesting short video interview, he is inspired by a quotation by Leonardo da Vinci who was concerned to distil a complex idea to its most powerful and simple format: "The more minutely you describe, the more you will confuse the mind of the reader, and the more you will prevent him from a knowledge of the thing described."

‘The Very Hungry Caterpillar’ is a deceptively simple picture book that continues to be written about by many academics, and Carle is somewhat bemused by all the in depth analysis, although he reflects that it is perhaps because it is ultimately story with a message about hope. 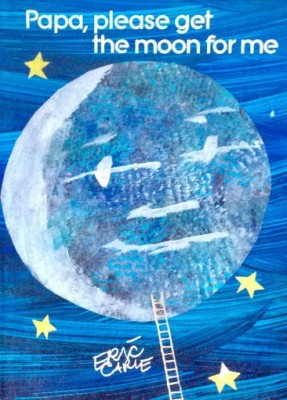 My personal favourite is ‘Papa, please get the moon for me’ because it epitomises the strength of his painterly style as well as depicting the waxing and waning of the moon. The colour is typically bold across most pages with only a little bit of text to help move the story along. The various blues of the sky are differently expressed on every page and contrast perfectly with the many yellow stars and grey white moon. The central theme is one about a father’s love for his daughter and how he would do anything to please her, a message which is typical of the warm and kindly atmosphere that suffuses all his picture books.

‘The Artist Who Painted a Blue Horse’ is one of his more recent books and demonstrates his respect for some of the ‘ degenerate’ modern artists banned by the Nazi regime which he first learnt about from his art teacher as a young teenager when he lived in Germany. His homage to one of these artists, Franz Marc, who painted many blue horses, chimes with Carle’s own fierce belief that artists should not be bound by conventional rules:

‘My green lion, polka dotted donkey and other animals painted in the ‘wrong’ colours were really born that day seventy years ago’. This is a message is one that he wants to get across to children so that they can draw and paint with confidence. I think that this extract from his website sums him up rather well:

‘Besides being beautiful and entertaining, his books always offer the child the opportunity to learn something about the world around them. It is his concern for children, for their feelings and their inquisitiveness, for their creativity and their intellectual growth that, in addition to his beautiful artwork, makes the reading of his books such a stimulating and lasting experience’.