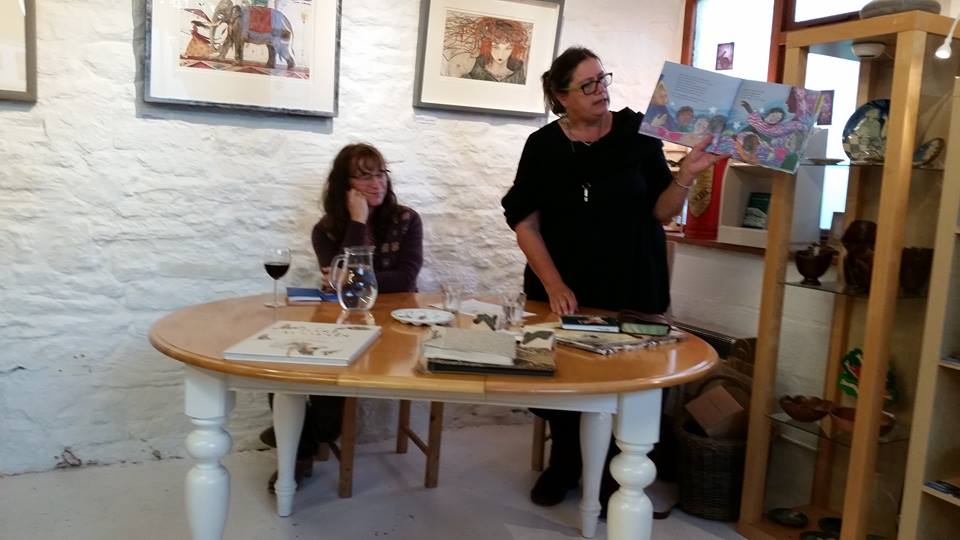 A Jackie Morris masterclass at the Blue Ginger Gallery, near Malvern

I am a big fan of any book written or illustrated by Jackie Morris and so it was a very happy co-incidence to find that she was being interviewed at a small local art gallery as a fundraiser for Acorns Children’s Hospice.  It was the perfect setting for an informal conversation with fellow artist Tamsin Abbott and an audience of about fifty people.  It was all very friendly and we were surrounded by cases of jewellery, ceramic pieces and a range of paintings included several by Jackie (unfortunately a bit over our budget).

Tamsin’s questions focussed on the relationship between an author and an illustrator, using the examples of her two most recent books, one of which she wrote and one of which she illustrated.  Jackie made the important point that her books are not written or illustrated exclusively for children but for people in general. It is always pleasing to hear an author reading their own words and so, before the interview proper began it was a treat to listen to ‘Mrs Noah’s Pockets’ which Jackie had written and to be shown the many wonderful illustrations by James Mayhew. After reading the story to the enthralled, predominantly adult, audience Jackie explained that she had a very clear idea about Mrs Noah’s personality as being calm, gentle, strong and a bit subversive. From what I know about her, I would guess that this reflects the author’s own personality.  I intend to review the book in more detail at another time but the story is about how, against her husband’s wishes, Mrs Noah is determined to include all the mythical creatures in the ark by hiding them in her capacious pockets. She explained that her ideas for the illustrations were not always interpreted by James Mayhew in quite the way that she had imagined and that she often had to reach compromises and trust him. For example, when she saw that he had included mosque like buildings on the land after the flood she questioned whether this might be historically inaccurate and he pointed out that she had insisted that Mrs Noah should have a ‘Singer’ sewing machine!  These two artists have a long established friendship and a mutual respect for one another’s work which must have made collaboration on a book reasonably good humoured.

In contrast she talked about how she felt a bit daunted at illustrating ‘The Lost Words’ which is a unique collaborative project with the author Robert McFarlane, even though it was her original idea inspired by taking some of the words from his earlier book ‘Landmarks’. Although Jackie is a prolific and highly regarded painter of wildlife, she explained that she sometimes needed reassurance from the author that she was interpreting his words in quite the way that he envisioned.

This extraordinary book is described by the publisher Penguin as ‘a gorgeous modern day spell book to conjure lost words and species back into our everyday lives’. Once again we listened and looked as Jackie read some extracts from this imposing large format book – beautifully evocative pieces of poetry in combination with three spreads of stunning pictures to illustrate each one. Another detailed review will be forthcoming for what looks like a very special book, yet to be published.  The original artwork and poems apparently also forms part of an exhibition at Compton Varney, Stratford which she recommended as being a very interesting aesthetic experience.

Overall, it was a fascinating glimpse into the often fragile relationship between an author and an illustrator. It seems that there is bound to be a tension between the two in terms of who has the final say in how some problems are resolved. I suppose that the editor and publisher has the job of keeping the peace and avoiding major fall outs and I wonder how often they have to step in. In the case of these two books it is clear that the outcome for both collaborations has been very successful.

It was great to enjoy such an entertaining conversation in such a pleasant environment – very different to the razzmatazz of a literary festival. This event also included a free glass of wine and a home cooked Thai meal as part of the ticket, so that was even better. More events like this please.