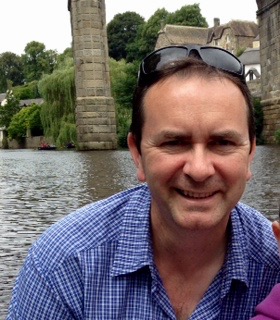 Having taught high school English for over fifteen years, Steve Williams knows his way around a rhyming couplet. He is the writer behind www.jiggerypoetry.com, a personalised poetry service that launched this year, and his first book, 'A Midsummer's Ice Cream and other Poems' is due out soon.

Steve has written comedy poetry for family, friends and colleagues for a number of years and is currently dipping his toe in the performance poetry and spoken word scene in Yorkshire as well as running writing workshops in schools and libraries.

He is married, has one daughter and lives in Yorkshire.

Oi, Poppins - where'd you get that swag?

The lamp stand and the mirror

Poking out of your carpet bag.

And that magical umbrella

With the parrot on the end,

That flies you over London

Listen, Poppins - don't get clever with me.

Now how do you explain

Zooming children up a chimney?

With whom you are acquainting?

No, don't fly over there

And start jumping in that painting!

I can't believe it's medicine

They fell asleep too soon.

I have a deep distrust of nannies

That use big words I can't say

And people who claim that they're

Practically perfect in every way.

Right Poppins - weren't you once a nun?

Escaping from the Nazis,

Took a family on the run?

Didn't you dress them up in curtains?

And go dancing around the fountains?

Last seen in the Alps

Oi, Poppins - tell me how you plead.

Tuppence a bag won't get you far

With all those birds to feed

'Cos I haven't got all night.

And don't you dare tell me

To go and fly my kite.

The course of true love never did run smooth

For Gary and Kaz on the van.

She was the sprinkles on his 99

And he was her ice cream man.

Through the streets of the north, they had ruled uncontested

And everyone knew theirs was best.

But things were to change in that long hot July

When their love faced the ultimate test.

Italian vans were always a threat

With their opera and exotic ices.

And expensive shades and smiles from the Med

But people round here, they knew what they liked -

Not flash with the money they made.

And this latest Romantic to challenge poor Gaz

Had his eye on more than his trade.

Luigi it was, with his tan and gelato

And eyes that lit up the street.

And try as she might, Kaz fell under his spell

And they quickly made plans to meet.

But no screwball was Gaz, he knew what was what

So he followed them into the forest.

Of her love, he was sure, so he took a detour

And bought her some daffs from the florist.

Then there in a clearing, against the low sun,

In the scent of Italian cologne,

Kaz, in the twilight, stared at her new man

And Luigi held out a cone.

As he sped through the brambles and trees.

And armed with some lollies, he jumped from the van

As cool as a blue Mr Freeze.

Kaz ran for cover; she knew what came next

As our hero reached for his pocket.

And poised like a fighter, he drew back his arm

And launched his first raspberry rocket.

Luigi just laughed when the second one came,

Amused by the Englishman’s folly.

But Gaz with his pride and some back up munitions,

Took aim with a strawberry lolly.

He caught the italian right on his nose

And knocked him straight onto the floor.

Blood drizzled down his Armani apron

And he staggered in through his van door.

The forest grew still as the sun disappeared.

Had the visitor now met his match?

But the scene burst to life and when Gaz turned to look,

Luigi jumped down through his hatch.

Cornets of every size flew through the air -

A rainbow of Napoli’s best

Granola, caffe and the rest.

A cider from Gaz with a choc ice to follow,

A blackcurrant Fab and a flake

But Luigi replied with a stracciatella,

Deep into the night, the warriors fought,

Until both nothing more they could stand.

With an icy grenade in his hand.

The Jubbly of Orange. The four-pointed bomb.

The deadliest ice in the van.

Corners of steel and razor-sharp edges -

Not one you'd take home to your gran.

Gaz hurled his last chance at the clown.

Then there in the distance, beyond the trees

He saw the Italian fall down.

Kaz looked at Gaz and Gaz met her eyes

Then they watched ‘til Luigi was gone

Then like fallen ice creams on a street in the sun

They melted together as one.