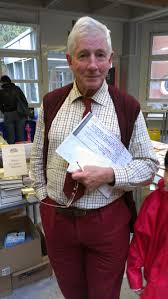 I find the chance to hear our great literary figures musing on their career and rummaging around their colourful past lives an almost irresistible offer. Quite how Crossley-Holland found himself talking to a teaching room full of admirers in Bartley Green – a particularly hard-to-find suburb of Birmingham – might well, I would guess, end up being one of his future anecdotes. Whatever peculiar conjunction of planets was involved in bringing this event about, I was glad I was there to take advantage of listening to Kevin giving us some tantalising glimpses of his past that have not necessarily found their way into the public sphere.

Crossley-Holland is one of those men who positively twinkle with a streak of mischief that he can’t always control. He was, predictably, eloquent about how he became a writer who is fascinated by myth and how, under the influence of some wise words from Auden, he turned his gaze away from the Classical world towards the neglected mythologies of the Norsemen. But I was more entranced by the little windows he opened on his career that surely deserve more exposure.

Just what is the full story of Kevin’s trip to see the widow of W.B. Yeats and  what exactly happened when he scattered dozens of red roses at her feet? Just what did the young Crossley-Holland write in the puff piece he was asked to produce in order to promote the published plays of Sean O’Casey? I hope we are going to find out sometime in the not too distant future. What exactly happened when, as a young and callow poet, he read for the first time to The Group and had his poetry ripped apart?

But most of all I want to hear about his first job in publishing. The young Kevin joined the Macmillan publishing house and had a spectacularly bad start updating their catalogue – he appears to have made a phenomenal amount of errors and yet somehow avoided being sacked. Inevitably, working in an environment like this allowed him to meet and correspond with some of the literary greats and, boy, could I have listened to a lot more of that. There’s a book somewhere in this stuff Kevin, and there’s lots of us who’d love to read it.