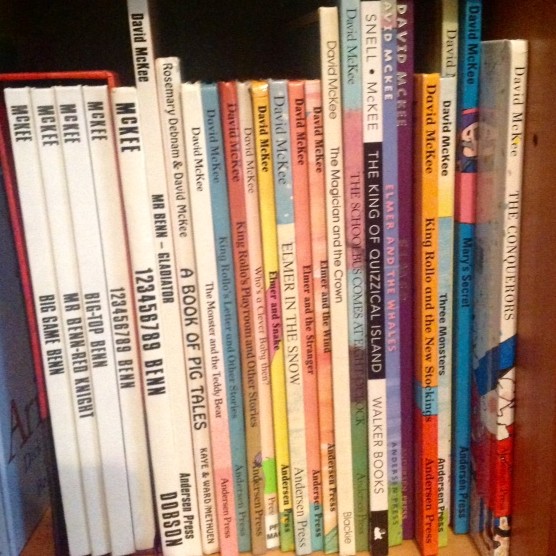 The Picture Books of David McKee

This illustrator published the first of his many vividly coloured cartoon style books in 1964 and is one of my all- time favourites. He is highly renowned for creating such cultural icons as Elmer the patchwork elephant and Mr Benn, the quiet unassuming individual who adopts a range of alter egos when he passes through the magic door of the Fancy Dress changing room. Both these fabulous characters have many adventures as calm and practical problem solvers and make their worlds a better place.  He is also famous for the picture book Not Now, Bernard in which a little boy is ignored by his parents to such an extent that he becomes a monster- and they still don’t appear to notice. His other acclaimed character who appears in many books is King Rollo who is a generous and unassuming ruler who has to deal with the same problems that we all faced with – for example how to remember the difference between left and right. The strong message about acceptance of difference and tolerance is a theme that pervades all his books, and is a conscious one.  The detail of his energetic drawing is masterful, deliberate and detailed.  He trained in fine art and acknowledges the influences of Paul Klee, Louis Vivin and Henri Matisse, echoes of which can be seen in his illustrations. His style gives us a child’s eye perspective of the world and is resonant of the way in which young children draw and paint using a flattened perspective, because they want to include everything in the frame. This might be one of the reasons that he remains so popular.