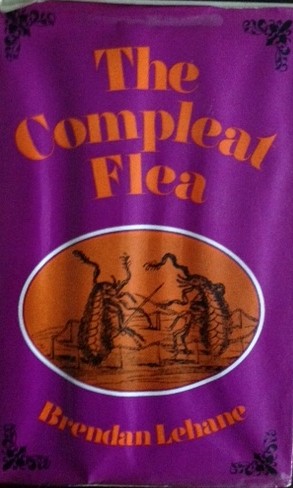 The Compleat Flea by Brendan Lehane

I’ve had this whimsical little book for over 40 years – I remember picking it up from a wire dump-bin in Woolworths for what amounts to pennies and it’s survived several shelf-purges over the years because I’m unaccountably fond of it. However, I should warn you that if you’re the suggestible type, you might want to think twice about reading it or come to terms with the possibility that you’ll become hyper-aware of every tickle or itch anywhere on your body and the certainty that you’ve become infested with these little blighters.

Lehane’s starting point is his own encounter with fleas he picked up in a ground-floor flat in Dublin when he was a student there. His experience was enough to spark an interest in the flea – both as a remarkable creature and as a social and literary metaphor. The jumping off point is, inevitably, the history of the way that humans and fleas have coexisted – reluctantly from the perspective of humanity who have marshalled all their ingenuity to trap them, eradicate them or, in the most eccentric of instances, train them to be circus performers. But the history of humanity is also a history of dirt – personal and public cleanliness has been, until modern times, an aspiration rather than a reality. This is a truth that includes all social classes – from peasants to royalty – and so the ideal conditions for the flea to thrive has pretty much always existed.

We also discover what an extraordinary creature the flea is from a biological and evolutionary perspective. It’s astonishingly well adapted to its needs and has what we might think as something approaching a super-power in its ability to leap from place to place over distances that are truly breathtaking. Look at a flea under the microscope and you’ll see something that looks like a fearsome alien but something that’s also unaccountably admirable and strangely beautiful.

But, for me at least, the most interesting parts of this book involve the way writers and artists have found inspiration in the flea. The flea was, of course, a central metaphorical device for John Donne (and others of the Metaphysical school of poetry) because it so conveniently symbolised the inter-connectedness of lovers who are able, through the behaviour of the flea, to share constant closeness with their amore.

But possibly the most arresting (and disturbing) artistic image must be William Blake’s watercolour entitled ‘The Ghost of a Flea’. It’s meaning and inspiration are a matter of constant speculation but what cannot be denied is its unsettling power. The picture shows a full length profile of a man-sized flea in almost human form – muscled as if it had been working-out for years – striding across the floor holding what seems to be a bowl for collecting blood. The face has a strangely alien, reptilian form with an unpleasant tongue slipping out between the barely existent lips. It’s a chilling vision.

Little books like this are, in my view, an eccentric pleasure. They aren’t academic, they aren't analytic and they don’t have pretentions to be. They exist because they are the result of a whimsy that becomes a fascination and it’s the enthusiasm of amateur study that carries it through. The book is very much in the spirit of the Victorian naturalist tradition when educated individuals rejoiced in opening the door on a world previously hidden or little thought of.

You may find this book quite hard to find. It’s obtainable as the 1969 hardback on second hand sites but you will have to pay the price of a modern new hardcover – but it will be worth it.