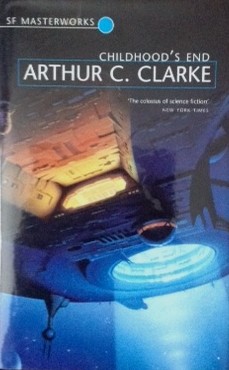 Many fans of science fiction consider Childhood’s End to be one of Clarke’s most important books – and it was a favourite of the author too. It was published in 1953 and many of its ideas and themes have found their way into what you might call the 'standard model’ of science fiction ever since.

The book starts with the arrival into Earth’s atmosphere of a fleet of spaceships who seem to be occupied by an alien species whose agenda, although peaceful, seems to be shrouded in mystery. The spokesperson for what become known as ‘The  Overlords’ informs the Earth’s population that from this point onwards they would take over the running of all Earth’s governance in order to prevent the species destroying itself. As part of this program, no-one from Earth is allowed to continue space travel or exploration.

What follows is a golden age of peace and development on the planet as The Overlords let it be known that they will be there for many years and will only consider revealing their true identity to humanity when they are ready for the shock. Five decades later the time is considered right and the real physical form of the aliens is very similar to traditional images of The Devil (very tall, horns, wings etc.) – a fact that suggests that these aliens had visited Earth before, found the species not ready for intervention but leaving behind a residual memory of the encounter.

When The Overlords finally do reveal themselves, it becomes clear that they are very interested in the psychic development of humanity and the history of its fascination with the paranormal. Interaction with humanity inevitably arouses interest and one astrophysicist, Jan Rodricks, manages to stow away on a visiting spaceship and visit The Overlord home world.

In the final section of the book it becomes clear that all this interest in humanity is leading to one thing – the eventual extinction of humanity as we know it; not by force of invasion but by evolution. Humanity is in fact being prepared to utilise their dormant, inherent psychic abilities to become part of the great universal Overmind.

The spaceship stowaway, Rodericks is returned to Earth by The Overlords and learns what the great master plan is. Because he has been travelling through space at virtually the speed of light, time for him has moved much more slowly than on Earth and so when he gets back he discovers that this evolutionary process The Overlords have been supervising has turned humanity into something unrecognisable to him

It transpires that the cosmic role of The Overlords is to undertake the preparation of species with the appropriate capacity to merge with the Overmind. It’s a job they have because they themselves don’t have the ability themselves to evolve to this transcendent state. It would seem that the residual memory humanity appears to have had of a previous visit from The Overlords turns out to have not been a memory at all but a premonition of the encounter with The Overmind.

At this point the Earth itself begins to dissolve and to eventually disappear, along with all inhabitants, into what is presumably its other dimensional future.

"In a soundless concussion of light, Earth's core gave up its hoarded energies. For a little while the gravitational waves crossed and recrossed the Solar System, disturbing ever so slightly the orbits of the planets. Then the Sun's remaining children pursued their ancient paths once more, as corks floating on a placid lake ride out the tiny ripples set in motion by a falling stone. There was nothing left of Earth. They had leached away the last atoms of its substance. It had nourished them, through the fierce moments of their inconceivable metamorphosis, as the food stored in a grain of wheat feeds the infant plant while it climbs toward the Sun."

There are, of course, clear echoes in this evolutionary other dimensional future that reflects the often puzzling conclusion of the later ‘2001 – A Space Odyssey’. As with much of Clarke’s work there are all sorts of ambiguities about how the author views humanity. Essentially he wrangles with the obvious weaknesses and foibles of humanity and the seeming contradictions implied by its possibilities and latent talents. Are we, as a species, unable, on our own, to overcome our basic natures and our capacity for self-destruction long enough to fulfil our long term potential?

I think I’ll leave you with that thought and urge you to get a copy of the book if you’re interested in pursuing these questions further. Paperbacks are readily available and cheap enough.