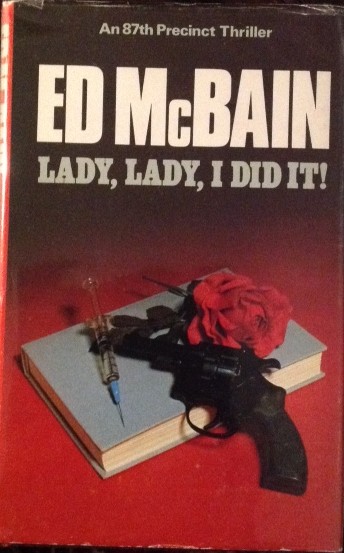 Lady, Lady, I Did It! by Ed McBain

Ed McBain ( 1926 – 2005) was the pen name of the astonishingly prolific, Evan Hunter. In fact, Evan Hunter was a name he only legally adopted in 1952 and his original given name was Salvatore Albert Lombino. Throughout his writing career he used five or six other pseudonyms for writing in other genres but it is as Ed McBain that he’s famous.

Under the McBain identity he created a number of hard-boiled, police procedural novels that became known as the 87th Precinct series that ran from 1956 – 2005. The books have quite a complex fictional landscape and cast that provide the rules which all of the novels abide by. The Wikipedia entry for McBain’s 87th Precinct books captures this well enough:

“The series is based on the work of the police detective squad of the 87th Precinct in the central district of Isola, a large fictional city based on New York City. Isola is both the name of the entire city and of the central district of the city (it fulfills the role of the borough of Manhattan within New York City). Other districts in McBain's fictionalized version of Manhattan broadly correspond to NYC's other four boroughs, Calm's Point standing in for Brooklyn, Majesta representing Queens, Riverhead substituting for the Bronx, and Bethtown for Staten Island.”

The cast of characters is extensive but move in and out of all the novels, developing as the series goes on. The creation of this fictional world and individuals you come to know well has created a devoted readership and made new 87th Precinct publications hugely anticipated by crime aficionados.

Lady, Lady, I Did It was released in 1961 and the fourteenth in the series – which is, I think, a good illustration of just how prolific McBain was, especially given that he also released another dozen or so books in that timeframe under his various pseudonyms. One consequence of such a titanic output is that the books can often be quite short, pacey and uncomplicated. This is certainly true of this offering which is little more than an afternoon’s read.

The detectives of 87th Precinct are called to a bloody and seemingly random shooting at a bookshop, where they find four people shot. One survives a few hours and mutters the only clue the team have to work on – ‘carpenter’. However, what makes this killing special for the team is that one of the people killed, Claire, just happens to be the fiancée of detective Bert Kling. His howl of anguish is shared by the whole team and effectively drives forward the investigation.

I’m clearly not going to tell you much more about the plot because this is a story that’s entirely plot driven and you will want to find out for yourself just how that fatal last word – carpenter – both leads them astray and eventually resolves the mystery.

Reading this book was a very easy experience – it’s immediately evident you’re in the hands of a master storyteller who understands exactly how to hang on to you and how to deliver the twists and turns such a novel requires.

I can do no better than leave the final word to the excellent review of this book on the Bloody Murder website:

“what lingers in the memory, along with the sheer below the belt knock of Claire’s death, is the lingering sense of life continuing regardless. This is both logical in a continuing series but also an original approach, McBain once again proving just how deft he was at countering reading expectation even in such an already long-running cycle of novels.”

Paperback copies are cheap and easily found on the second hand market - first edition hardbacks are much harder to come by and cost more.