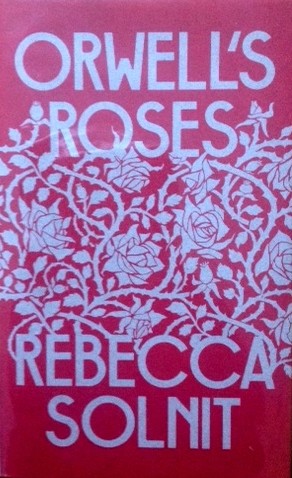 You have to wonder just how many new ways into writing about the life and work of George Orwell are left to be found. I have to say that I’m hugely sceptical of this industry and the urge to uncover novel new approaches to a man whose life and career has been so copiously documented, so another new book – one that takes the unlikely route of exploring Orwell’s love of gardening as its starting point - naturally raises my eyebrows.

But I’m a hopeless Orwell addict and I’m easily seduced when it comes to anything that promises some new insights and Rebecca Solnit’s Orwell’s Roses was one I knew I’d eventually have to give in to. To be honest, I wasn’t expecting to like it and I was more than prepared for having to write a slightly jaundiced review.

But, how wrong I was.

This really is a quirky, idiosyncratic little number that I thoroughly enjoyed. Its starting point is the idea that Orwell biographies paint the man as unremittingly gloomy and dour when in fact there’s plenty of evidence for his softer side – gardening included – which goes unnoticed. I’ve got a lot of sympathy for this because I have written elsewhere on this site about the humour of Orwell and the way that too gets passed over without comment.

But this isn’t a book about Orwell the gardener and lover of roses – that truth is simply the starting point for a glorious and erratic journey through a whole host of topics, including aspects of the writer’s life, that Solnit guides us through in her engaging and relaxed way. So we get a botanical angle on revolution, Fascism, enclosures, economics and just about everything that happens to intrigue her – reading this is a bit like playing tag with subjects as one after another moves into the limelight.

Of course, while eclecticism of this kind can be charming, it can also be its weakness and it’s a style that can irritate some people in equal measure. I happen to think t is the right side of being a set of fascinating connections but I can also see how others might construe it as a ragbag. Ilana Masad reviewing the book on the npr website clearly also found herself on the right side of the line:

“Even when the associative leaps evoke, as they do on occasion, some head-scratching, there is an exuberance to them, and it seems, at least to me, that Solnit is having fun when she makes these connections — finding joy in the intellectual pursuit of writing and thinking. That she allows herself to do so in a book that is in many ways very serious too is in keeping with the very aesthetics it's engaging with.”

Having said that this isn’t primarily a book about George Orwell – merely one inspired by him – Solnit doesn’t shy away from giving us some further insights into the man. She doesn’t introduce us to anything new or anything you won’t have encountered in reading Orwell’s journalism or the various critical studies and biographies but what she does do is to bring to our attention things that might have slipped past us without really spotting. I certainly enjoyed her ability to chop through the usual stuff and highlight what might not have been given any prominence before. Orwell drew criticism for some of his As I Please columns that covered issues like the pleasures of gardening and relaxing because there were those who felt that they lived in times that needed a more undiluted didactic political commentary and that there was no time for what they saw as whimsy. Orwell, of course, knew the value of bread AND roses.

This turned out to be an unexpected pleasure – and all the more so for being unexpected. I’m pretty sure Orwell himself would have appreciated the way the book makes the political natural and the natural political. Books that take you by surprise into places you’d not expected to visit are always welcome I think and that’s especially true when they don’t belabour their topic and don’t outstay their welcome. It’s a book to return to because I’m pretty sure you’ll find something new in it when its reread.

At the time of writing this review, the book is only available as a hardback but I’m pretty sure a paperback will be along in the not too distant future.