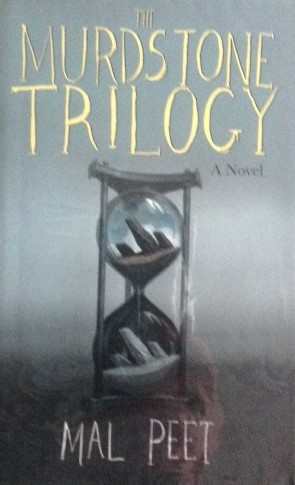 The Murdstone Trilogy by Mal Peet

Mal Peet, who died at the age of 67 in 2015, was much loved and admired by the children’s literature community – he was a multiple award winner in the world of young adult fiction - but never really became a popular name in the wider reading public. The Murdstone Trilogy of 2014 marked a change in direction and was his first (and sadly last) adult novel – although there was a posthumous publication of a novel called Beck which was completed after his death by friend and admirer, Meg Rosoff.

The Murdstone Trilogy isn’t actually a trilogy of books by Peet himself but the name of a book sequence planned by the book’s central character, Philip Murdstone. Murdstone is a fading star of children’s literature – he’s been surfing on the success of his first big hit and, having rashly purchased a remote cottage in Devon, he’s now finding he can’t hit the mark or keep abreast of the new, dynamic social media-driven world of young adult fiction.

Murdstone’s glamorous agent (after who he lusts) tells him that unless he shapes up, he’s finished but she has an idea to put him back in the game – he must get in on the fantasy (Phantasy) market. She maps out for him all the ingredients of a successful plot, complete with suggested dialogue – all of which appals Murdstone who thoroughly hates the genre.

But he does at least go as far as taking a batch of Phantasy novels from the library and tries hacking through them – without the slightest inspiration. However, following a titanic drinking session he falls asleep in the graveyard and has a vivid dream in which the outline of a book develops, fully formed, in his mind. The book will be called Dark Entropy and when he wakes he finds the odd voice that narrated the story in his dream is still with him in the waking world and the book gets written as if Murdstone is possessed by the spirit of the story.

Suddenly Dark Entropy is THE thing and once again Murdstone is the talk of the town. But at what cost? Has the world of Phantasy found a gateway into the real world via Murdstone? And what’s the devils bargain he will have to strike in order to get the rest of the trilogy written?

Well, that’s for you to find out if you decide to read the book.

The first half of this book is a wonderfully dyspeptic  satire on the world of children’s literature and the whole fantasy genre – and it’s even more delicious because it’s coming from someone you know is an insider. Harry Ritchie, reviewing the book in The Guardian in 2014 puts it like this:

“Not many novels about novelists are as acute or as entertaining as this: a genuinely funny comedy that takes the piss – out of Devon, the writer’s lot, the whole fantasy genre – with a Pratchettian mix of gusto and warmth. The latter quality is particularly helpful in the literary satire, which skewers the tropes of an entire genre while managing to keep the phantastic storyline going as a valid part of the plot.”

The more explicitly satirical tone of the novel moderates considerably in the second half of the book as the pace of the story picks up and Murdstone’s dilemma becomes more complex. Two-thirds of the way through you realise that actually you’re inside a Pratchett-like phantasy novel in its own right.

It’s a clever, often very funny, novel that, stylistically, seems to sit in a sort of no-man’s land between adult and young adult fiction – quite where one becomes the other I’m not sure but I couldn’t escape the feeling that I was walking the line between the two.

Paperback and hardback copies are easily available and aren’t expensive – expect to pay under £10.