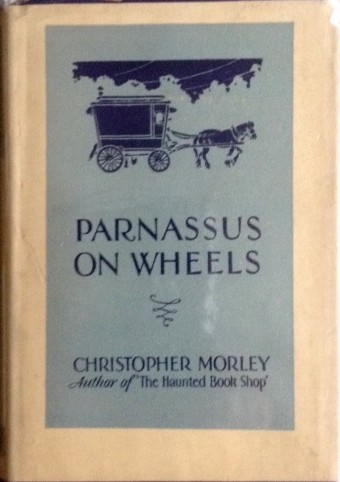 Parnassus on Wheels by Christopher Morley

Parnassus on Wheels (1917) was actually the first novel published by the American writer, Christopher Morley (1890 – 1957) but it has been overshadowed by his later sequel, The Haunted Bookshop which has had a devoted following among bibliophiles. Morley was a prolific journalist, poet and essayist in addition to writing his novels but, in terms of a wider reading public and recognition (especially here in the UK), his profile has declined substantially over the years.

Throughout his life Morley remained a public advocate for reading and books and a later book of essays and speeches, Ex Libris considered aspects of bibliophilia and reading. His attitude to the role of books, reading and learning is well captured in one of his more quoted bon motes:

Parnassus on Wheels is a gentle, good-natured, bucolic little book-centred adventure in which brother and sister, Andrew and Helen McGill live a rather ordinary life on a small farm in the sort of rural America that no longer exists. However, when the two inherit a substantial library from a dead uncle, Andrew develops literary aspirations, begins to neglect his farming role and takes up writing (with some success) while Helen becomes more dissatisfied with having to keep the farm going almost single-handedly.

When, one day, a travelling wagon that is also a mobile bookshop carrying the painted sign ‘Parnassus on Wheels’ trundles into their yard, Helen’s adventurous side suddenly comes to the surface. The current owner, Roger Mifflin, is seeking to sell the wagon – possibly to Andrew – but Helen sees an opportunity for an adventure of her own and she buys the business as a going concern, horse and dog included.

What follows are some moderate adventures and a touch of romance as the middle-aged Helen and the entertainingly eccentric Roger become emotionally entangled. There’s plenty of very gentle humour, a splash of minor jeopardy and plenty of eulogising about books and the value of books to remote communities.

The real charm of this book lies in the character of Roger Mifflin who is the Wizard of Oz of the book-mobile world – he has a way with words and an ability to resolve conflict that is almost magical and which bewitches his female travelling companion. Morley, in his own modest way, also confronts the issue of sexist assumptions and notions of what is appropriate behaviour for women. Helen’s brother Andrew has insufferable, chauvinist attitudes towards his sister that she has the confidence to dismiss but which the rest of society is prepared to support regardless of evidence. So, for example, Andrew has Mifflin arrested at one stage for exploiting Helen and taking her money under false pretences – a charge that leads him briefly into prison despite Helen’s vigorous advocacy. The assumption is, of course, that no normal, decent woman would want to undertake such an enterprise or use her money in such a way unless she was being coerced.

But I’m in danger of making this sound more like a clarion-call for women’s equality than it actually is. In the end it’s a man – Roger – who saves Helen from bandit vagabonds and who proves to be her ultimate salvation through marriage. But, we are told, a marriage of equals.

The book is essentially an adult fairy tale and needs to be approached as such – it’s a gentle read for a quiet afternoon. Paperbacks are readily available for well under a tenner but you’ll have to pay substantially more for a good hardback and first editions are scarce.