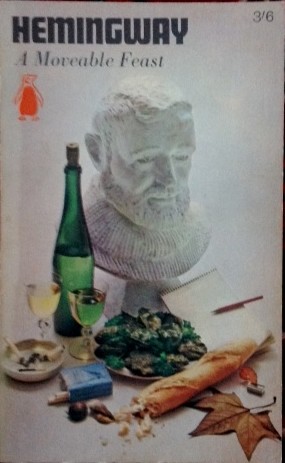 A Moveable Feast by Ernest Hemingway

Published posthumously in 1964 following the author’s suicide in 1961, A Moveable Feast is a memoire of his early career in Paris that he was prompted to write by the discovery of some diary notebooks he had stashed away. He completed it only a couple of years before his death but rather than the rueful backward glance to a more halcyon time you might expect, Hemingway provides us with a delightful, gossipy – sometimes waspish – account of his circle of acquaintances. And what a circle it is – Gertrude Stein, James Joyce, Scott and Zelda Fitzgerald, Wyndham Lewis, Sylvia Beach, Ezra Pound to name only a selection.

This might have been unexceptional if it had been the reminiscences of an elderly writer in his dotage but that’s not the case. Written when he was actually still in his late 50s, this rather playful memoir remarkably comes from the pen of a man who was sliding towards despair. The depth of the pit Hemingway found himself in is well described by Sam Jordison writing in The Guardian back in 2012:

“Physically and mentally, however, there was no question that he was struggling. His once-powerful body, already softened by years of good living and hard drinking, took a pummelling in the years after the war. A car crash in 1945 smashed his knee. Two successive plane crashes in 1954 gave him severe concussion, a broken skull, cracked discs, burns, kidney and liver ruptures and a dislocated shoulder. Then he was caught in a bush fire for good measure. Add to that his wounds from the first world war, insomnia, high blood pressure, arteriosclerosis, and a dangerously increased alcohol intake to counter all the pain, and you have a sick man. Elsewhere, his literary friends (and enemies) were dropping like flies. He'd been through three divorces and his children – especially his youngest son, Gigi – were all troubled. He was becoming increasingly convinced (rightly as it turned out) that the FBI were trailing him. He also suffered – as did so many in his family – from depression.

Despite this backdrop, A Moveable Feast is, in my view, a page turner that gives us a fly-on-the-wall opportunity to share some time with the strange idiosyncrasies of Gertrude Stein’s control freakery  or Scott Fitzgerald’s miseries. Of course, not everyone gets out of this unscathed by Hemingway’s scrutiny – he loathes Wyndham Lewis and is especially spiteful about Ford Madox Ford who he describes in the most unpleasant way:

"as upright as an ambulatory, well clothed, up-ended hogshead."

Hemingway draws the picture of a smelly, unprepossessing bore whose company is  intolerable:

“I had always avoided looking at Ford when I could and I always held my breath when I was near him in a closed room.”

This is naked score-settling and a chapter of the book that has drawn plenty of condemnatory commentary from a range of critics dismayed by the mean-mindedness of it all. But to be honest I rather admired it – Hemingway had his reasons for disliking  Ford and wasn’t going to hold back and I’m as happy to accept his poisonous portrait as a true reflection of his feelings. And it’s also the case that there are other profiles of Ford that support the view that he was something of a shambling wreck and indeed he was smelly.

And Hemingway could be warm and generous in equal measure as the deeply affectionate portrait of Sylvia Beach, the owner of the bookshop, Shakespeare and Co. shows. She was the writer’s saviour on more than one occasion and he clearly never forgot that.

The general view of Hemingway’s career was that by the middle to late 1950s his powers were waning and his reputation on the slide – all things that possibly contributed to his suicide just a handful of years later. But in A Moveable Feast, Hemingway seems to have found a space and a subject that enabled him to relax and have some fun again and that makes this, for me at least, a book worth returning to more than once.

Paperback copies are readily and cheaply available for well under a five pound note.