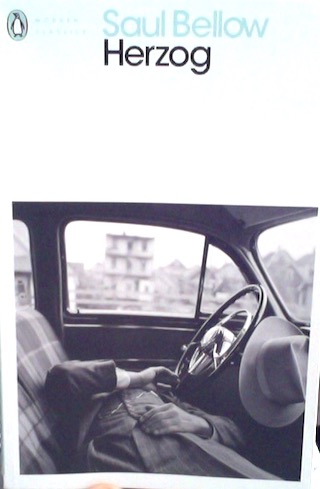 In the late-70s and throughout the 1980s and into the 90s I read Saul Bellow, finding the very late books only marginally less good than the earlier work, and welcoming everything as it came along. The most recent Bellow I read was the marvellous Collected Stories in the Penguin Modern Classics series. But it has been years since I last read any of the novels.

And so over the past couple of weeks I have been slowly rereading Bellow’s 1964 novel, Herzog. This was his sixth novel – not his first ‘grand’ novel (that was The Adventures of Augie March published ten years earlier), but certainly the book that established him in the public eye.

Set during the 1950s (during the Eisenhower administration), it is a multilayered and complex narrative in which recollections nestle inside recollections, like Russian dolls. The novel revolves around the turbulent love life of Moses Herzog, an academic and historian of philosophy and ideas, but it touches on all of Bellow’s most persisting themes and preoccupations: Jewishness and Jewish suffering, the Holocaust, the immigrant experience and the Jewish diaspora, early poverty, the Russian Revolution, esoteric ideas, literature, memory, consciousness, what it is to be human…

But what makes Herzog a little different is that in this novel ideas are centre-stage, for unlike some of Bellow’s other central characters Herzog is a bona fide academic rather than an idiosyncratic autodidact, and ideas and the history of ideas are his everyday currency. He lives surrounded by the great thinkers and philosophers. Indeed, he exists amidst such a jostling, clamouring crowd of interior voices that sometimes clear thinking on the simplest topics eludes him. Or perhaps more accurately, there are no simple topics, because everything, viewed from Herzog’s world-historical perspective, is complex. Add to this the fact that a good part of Herzog’s compulsive interior monologue is conducted in scribbled letters to world figures, to friends and family living and dead, and you have a very heady mixture indeed.

Herzog is a sort of high-voltage shaggy dog story, for it really has no plot as such. Rather, one reads it for the unstoppable, unquenchable flow of its exuberant, exultant language. And what language it is. The saltiness of its Yiddishisms, certainly, but also its extraordinary descriptive writing, the accuracy of it, the astonishing detail of its recall. Perhaps it is all invention and Bellow was not possessed of an eidetic memory, but this is not the impression I get. Here are a few examples at random.

Herzog remembers his father standing “under the bulb, which had a spike at the end like a German helmet. The large loose twist of tungsten filament blazed.” A street of his childhood is “rotten, toylike, crazy and filthy, riddled, flogged with harsh weather…” He remembers his mother’s genteel aspirations in pre-revolutionary Russia where she had been used to “linens and servants…the dacha in Finland (all founded on Egyptian onions). Now she was cook, washerwoman, seamstress on Napoleon Street in the slum. Her hair  turned gray, and she lost her teeth, her very fingernails wrinkled. Her hands smelled of the sink.”

Bellow turns lamentation into art. Here he is musing on the effect that the war has had on his father’s claim to Jewish suffering:

“What happened during the War abolished Father Herzog’s claim to exceptional suffering. We are on a more brutal standard now, a new terminal standard, indifferent to persons. Part of the program of destruction into which the human spirit has poured itself with energy, even with joy. These personal histories, old tales from old times that may not be worth remembering. I remember. I must. But who else – to whom can this matter? So many millions – multitudes – go down in terrible pain.”

I don’t know how widely read Bellow is nowadays. He was awarded the Nobel Prize for Literature in 1976 and died in 2005 aged 89. He had by then been suffering from dementia for some time. Had he lived longer it is almost certain that his sometimes outspoken views would have found him deeply embroiled in culture wars that he never quite seemed to have the good sense to walk away from. This was already the case in the early-90s when – in his words – a misunderstanding in an interview led to critics claiming that he “was at best insensitive and at worst an elitist, a chauvinist, a reactionary and a racist – in a word, a monster”. (He said elsewhere, that he was after all “an elderly white male – a Jew, to boot. Ideal for their purposes.”)

I continue to read Bellow because his prose is glorious and – what I haven’t mentioned – funny. Even as it teeters on the very edge of being overwhelming, it is glorious.

Herzog is a dense, exultant, febrile, high-intensity novel. It won’t be rushed and it requires effort. It plunges one deep into the American mid-twentieth century – into that period when we genuinely believed not just in the concept of the “Great American Novel” but in its fulfillment. And Bellow probably was its fulfillment. Martin Amis, Bellow’s greatest advocate amongst UK writers, has said that reading Bellow leaves him feeling as if all language has been used up, with none left over for other, lesser writers. I think I know what he means.