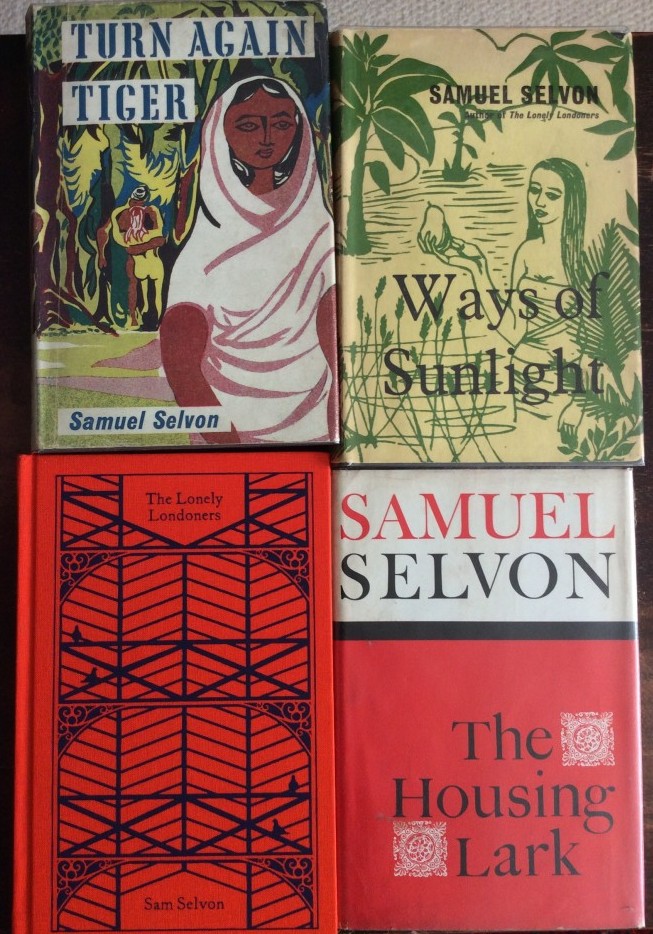 In 1956 the Trinidadian writer Sam Selvon published his third novel, Lonely Londoners. It would become an iconic and in some respects revolutionary account of Caribbean migration to Britain, credited with helping create a voice for the Windrush generation and a bold, contemporary fiction that for the first time spoke directly of the experiences of London’s new black, working class poor as they struggled to make not just a living but a life in post-war austerity Britain.

The novel, which is heavily autobiographical, opens with Moses Aloetta, fixer, ‘welfare officer’ and an experienced new arrival in Britain, setting out to meet a man who has just arrived from Trinidad. Its opening sentence is justly famous:

One grim winter evening, when it had a kind of unrealness about London, with a fog sleeping restlessly over the city and the lights showing in the blur as if not London at all but some strange place on another planet, Moses Aloetta hop on a number 46 bus at the corner of Chepstow Road and Westbourne Grove to go to Waterloo to meet a fellar who was coming from Trinidad on the boat train.

Its language is immediately arresting and even a cursory search will identify academic papers beyond number that discuss the significance of the ‘creolised’ language that Selvon created for his work. But even this acknowledgement sells Selvon’s achievement short, I think, for what he manages to do in this and subsequent novels is advance Black British fiction socially and politically while at the same time creating a prose form that is wonderfully lyrical and descriptive – not just a new voice in British fiction, but a new sensibility, a new way of thinking about what the novel is and how it can be used.

Selvon didn’t arrive at this new form immediately. Initially he struggled to write the book in Standard ‘realist’ English before admitting to himself that this couldn’t be made to work and that to successfully describe the experiences of his characters he needed something new, a language that spoke from inside their lives rather than a language (that of colonial officialdom) that observed them from the outside.

But what came after The Lonely Londoners? Selvon wrote what some regard as a ‘London trilogy’ (The Lonely Londoners, Moses Ascending, and Moses Migrating), charting the rise of Moses Aloetta and a fourth London book, The Housing Lark, which doesn’t have Moses as a central character.

I haven’t read The Housing Lark or Moses Migrating, but I have just read Moses Ascending (1975) and in many respects this was where Selvon’s reputation began to suffer and he became mired in controversy. I think I understand the causes of this controversy, and despite this I still think that Moses Ascending is a valiant novel even if not a successful one.

By the time of Moses Ascending London and its black communities are changing. Moses, once the veteran settler, worldly, street smart, is in danger of being left behind. Newer, younger Caribbean migrants and first generation Black British are more politically savvy, more militant, more active, more organised. These are revolutionary times and the lessons of black nationalism in Africa and the organising skills and militant resistance of the Black Panthers and other groups in the US are now evident – even in the basement of Moses’ own house (yes, he has risen from underclass to landlord), where his white factotum, Bob – his handyman, agent and, in a conscious echo of Robinson Crusoe, his Man Friday  – has let a flat to Brenda, a black militant and organiser for a local Black Power chapter.

First, we must acknowledge that Selvon’s comic masterpieces are also triumphs of sophisticated irony, satire and subversion. Do not read him expecting a conventional, valorising view of black people because this isn’t what one gets. With Moses as his mouthpiece he is as capable of excoriating his black characters as he is the hypocrisy and racism of his white characters. But it is his treatment of women, particularly in Moses Ascending that caused the biggest storm. Yes, of course it can be argued that the overt and rampant sexism that pervades the book is a product of and an accurate reflection of its time, and as such is pointless to argue over. But again it isn’t quite that simple. In this case, it weakens the novel because there is something fundamentally unrealistic about it.

Like that other controversialist VS Naipaul (but nowhere near as contrarian or as irascible), it is undoubtedly the case that Selvon also had a complicated relationship with his own Indian-Trinidadian heritage and this has to be considered and acknowledged in the work. I don’t pretend to be equipped to do that; my focus here is only really a consideration of why Moses Ascending falls short of the magnificence that is The Lonely Londoners.

When I began to look into some of the old, background controversies that surrounded Selvon and Moses Ascending I felt confident that it would be possible to attribute any shortcomings to post-hoc correctness – if you like, to a writer refusing to bow to the strictures of the newly emerging narratives of “post-colonial literature” in academic and political circles.

Again, if only it were that simple. But I found that unlike The Lonely Londoners, which uses Selvon’s newly-minted idiomatic speech to create perfectly modulated, lyrical prose, in Moses Ascending the conscious echoes of literature are beginning to dominate and overstretch the dialogue (in the later stages of the book Moses and to a lesser extent even his go-fer Bob have a distinct Elizabethan tinge to their speech). The comic effects seem overwrought, too self-conscious, the comedy has become farce, and the treatment of Brenda, the black militant, in particular is clumsy. (It is also intentionally, satirically reactionary, but that isn’t the main point: it’s clumsy.)

What in The Lonely Londoners was sophisticated, beautiful, deceptively simple, in Moses Ascending has become somewhat crude. Of course, it is now a given that today we regard much of what the 70s typified as toxic, and rightly so, and perhaps Moses Ascending is to some degree a victim of that.

But I’m determined not to critique Selvon’s novel based on the false values of hindsight. What I’m trying to understand is why it fails to work in the way that The Lonely Londoners so gloriously does – and I’m aware that I still haven’t answered that question very satisfactorily. What I will say is this: I think that as a novel it fails, but when a flawed novel makes you think this hard about its failure, all is not wasted.

Anyway, try the experiment yourself. At the very least, read The Lonely Londoners because it is a genuinely great novel. And if you do want to explore the background to this great writer, then Hari Kunzru’s brilliant introduction to the 2007 Penguin Modern Classics reissue of The Lonely Londoners is a great place to start.