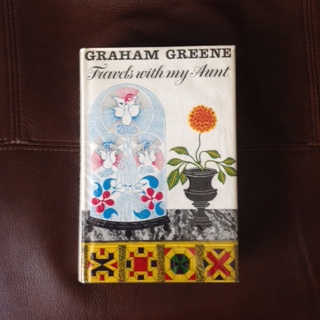 Travels With My Aunt by Graham Greene

I’m not sure when it happened but after a scintillating career as one of the great character actors of the late 20th century Robert De Niro decided he should be doing comedy. And, it was a mistake of humungous proportions – like watching a horse riding a bicycle. The idea of a comic novel from Graham Greene has always struck me as a career move from the same stable and, as a result, I’ve pretty much steered clear of Travels With My Aunt, fearing a similar level of crushing disappointment.

During this pandemic year that seems to have stretched out forever, I’ve been trying to read some things that I would normally have steered around and so I’ve  done my best to embrace some ‘comic’ writing in the hope that I can see why these might be an escape of some kind from the brutal reality of a plague year. With the exception of P.G. Wodehouse, I can’t say it’s been going well and so I thought that maybe a writer of Greene’s pedigree might just be worth a shot. Wrong again.

I’m sure there must be someone out there who has been busy writing a book about the Aunt in literature and it’s a trope that always seems to associated with comedy of one kind or another. Greene’s Aunt Augusta clearly makes a nod in the direction of previous Aunties of the literary kind from Oscar Wilde to P.G. Wodehouse but his 1969 creation subverts the genre in typical 1960s counter-cultural ways. Augusta’s dull and stolid nephew, Henry Pulling finds his Aunt has taken him under her wing when his mother dies and he retires from his bank job and she takes him on a series of picaresque adventures across Europe. All this febrile excitement leads our Henry to throw over his old securities in favour of a career smuggling illicit drink and cigarettes in South America.

But the puckish attempt to subvert a genre is undermined by what feels like a writer trying far too hard to be ‘comic’ and achieving something wooden and self-conscious instead. And that’s only the start of the problems because the characters revolving around Augusta and Henry turn out to be dreadful stereotypes. Augusta’s black African lover turns out, of course, to speak a cartoonish pidgin-English, deals in drugs and dabbles in petty crime. American ‘hippy’ Tooley, used to mercilessly satirise 1960s poseurs, is a young, gullible, emotionally unstable young woman hopelessly vulnerable to preposterous men with idiotic quasi-hippy philosophies.

And then there’s the unaccountable crowbarring-in of Catholicism. At every turn Greene seems to think it’s either desirable or amusing (I’m never sure which) to throw in a reference to the Catholic proclivities of any individual, no matter how artificially its introduced.

Sam Jordison, writing for The Guardian in 2012, also spotted this oddly misplaced desire to force Catholicism into the narrative:

“I did a search in my ebook edition and the word "Catholic" came up 17 times. That's more than twice a chapter – but I was actually surprised it wasn't more often, it had bugged me so much. The problem isn't how frequently Greene mentions his faith, but how much it stands out when he does. Do we even need to know that Aunt Augusta is a Catholic? We're told so right at the start, and regularly reminded, so it was clearly important to Greene. Perhaps it could be argued that it adds a dimension to her character. It also allows for a few good jokes: "I sometimes believe in a Higher Power, even though I am a Catholic." "Where is my father?" "As a half-believing Catholic," Aunt Augusta said, "I cannot answer that question with any certainty, but his body, what is left of it, lies in Boulogne." On the other hand, the Catholicism seemed rather foisted upon this promiscuous lady, with a healthy disregard for the institution of marriage, intelligent attitude towards contraception and abortion, and a marked dislike of authority. Perhaps it's just another of her many contradictions. But it's hard not to feel that Greene is scratching an itch in making her RC.”

In the interests of full disclosure, I have to admit that I gave up on the book about two-thirds of the way through but I don’t think it really made too much difference to me. I can’t see any way that I was suddenly going to become a convert to this corner of Greeneland.