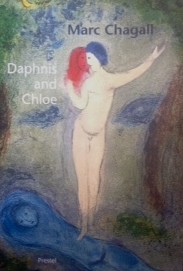 I’m going to be honest right up front: I’ve never been a great fan of Marc Chagall. The seemingly intentional naïve amateurism of the drawing, the rather vaporous – almost ethereal – depictions of the human form and a sort of dreamy surrealism that characterises some of his most reproduced images lends itself well enough to popular arty greeting and postcards but I just never could see why I’d want to spend time with them.

All true enough until I came across this 1994 edition of Daphnis and Chloe published by Prestel. Here text and illustrations fit together perfectly and Chagall’s artistic vision takes on a purpose, a sense of belonging.

The love story of Daphnis and Chloe is a masterpiece of the Classical world – but the kind of thing that leaves me cold in the normal run of things. Daphnis and Chloe is the tale of a baby boy and girl who are coincidently discovered, two years apart, having been left to fend for themselves on a Greek mountainside. The two are adopted - one by a goatherd and the other by a shepherd and they grow up unaware of one another's existence - until the god of love, Eros, creates in them a sudden overpowering desire for one another. Of course, as the entry in Wikipedia tells us concisely enough, things don’t go at all smoothly until the happy ending:

“Throughout the book, Chloe is courted by suitors, two of whom (Dorcon and Lampis) attempt with varying degrees of success to abduct her. She is also carried off by raiders from a nearby city and saved by the intervention of the god Pan. Meanwhile, Daphnis falls into a pit, gets beaten up, is abducted by pirates, and is very nearly raped. In the end, Daphnis and Chloe are recognized by their birth parents, get married, and live out their lives in the country.”

But in all honesty, I’m not reviewing this book for the love story but for the transcendent illustrations that bring it alive for me.

Chagall was no longer a young man when he took on this project and by the time it was done he was well into his 60s. Park West Gallery’s excellent appreciation of Chagall’s work is hard to top:

“ Chagall’s whimsical rendition of Longus’ romantic adventure is heightened by his expressive use of color in each image. The process of lithography requires a complex layering of colors to produce a finished image. In Chagall’s Daphnis and Chloé suite, 20 to 25 different colors were used for each individual image, requiring a great deal of time and precision to produce the final image.

Inspired by his travels in Greece, Chagall created a series of pastel drawings and gouache paintings as studies for his lithographs. He used these early drafts to guide his work with renowned lithographer Fernand Mourlot.”

The colours Chagall uses really zing off the pages – there’s an almost Mediterranean feel about the illustrations which eschew ideas of realism in favour of colour harmony that speaks of the beauty of love – and sometimes of its conflicts. Writing  for the National Gallery of Canada, Katherine Stauble describes the extraordinary use of colour in this way:

“Recurring colour themes act as symbolic leitmotifs for the story as it unfolds: a soft emerald green for the idyllic courting scenes in the pastures and orchards of Lesbos; hot reds, oranges and yellows for the lustier scenes; rich midnight blues for night; and clashing colours, with browns and reds, for violent battles.”

Prestel have done a really excellent job in capturing these illustrations in all their impactful power. What’s even better is that you can get hold of a copy for the comparatively affordable price of £20 or so – cheap for an art book these days. 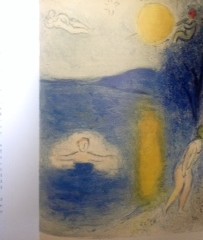 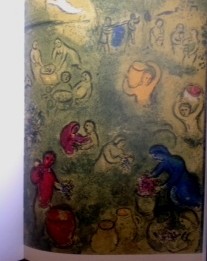 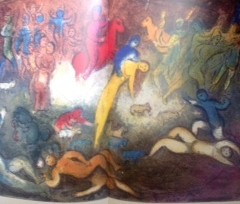