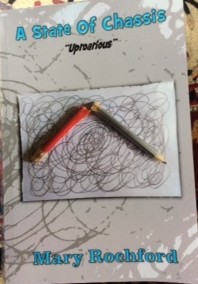 A State of Chassis by Mary Rochford

There are plenty of ‘campus’ novels that focus on the intrigues and many absurdities of academic life at a university – my personal favourite being The History Man by Malcolm Bradbury. Emily Temple recently wrote a piece about the interesting qualities of campus novels on the Literary Hub:

‘For me, a true campus novel has a sense of enclosure, almost like a locked room mystery or an off-world fantasy; campuses develop their own systems, hierarchies, and mythologies that are distinct from the world at large’.

This definition applies just as much to ‘A State of Chassis’ which unusually uses a Community Further Education College as its setting. I’m not sure whether there are any other novels that do this, but I recognised the world because I used to teach in one in the early 1990s. And what a strange experience it was, which the author captures with absolute precision. At that time, such places were in the process of being turned upside down and inside out due to leaving Local Authority control. Instead they were being privatised, reorganised, rebranded and dominated by the shiny Management culture that had emerged a few years before. I vividly remember being shut in a room with other lecturers for three consecutive days and being ordered to rewrite a course which needed to jam two years previous content into less than half the time. All the interesting stuff had to go including time for student discussion and reflection, because that couldn’t be sufficiently measured. It was a demeaning process that has of course continued to erode education at every level ever since.

All this made me the ideal reader and I very much enjoyed some of the laugh out loud moments. The author creates several outlandish monstrous characters at the management level. I distinctly recognised Penelope Witnit who spends time devising acronyms and whose busy schedule includes a ‘Meeting with the Manager of Human Betterment to discuss the initiation of the consultation process of the projected Staff Handbook’.  Countless meetings about meetings fill her diary and not much is ever achieved. The ghastly Mathew Craven, Manager for Perspectives, Images and Consolidation,  thinks of himself as ’an innovator, a man who had left behind the old-fashioned concept of the ‘cutting edge’ and was prepared to embrace the more dynamic, more modern ‘ bleeding edge’. These characters are tempered by those of more ordinary, unpretentious lecturers and students who spend much time mocking and laughing at the senior staff. This is after all how most organisations work and how the workers both undermine authority and stay sane and powerful in the process.

I liked the varied narrative structure throughout and also the way in which the story was framed by glimpses of how different media sources might report the climactic debacle when Craven is humiliated along with the rest of the Management.

This entertaining and sometimes surreal novel has a happy ending because, with support from the Union, the proposed changes to workplace terms and conditions are ultimately voted against. It is described as ‘an uproarious satire’ but I feel it is more of a ‘farcical tragedy’ because it is just a bit too close to reality. After all we currently have an ex Fireplace Salesman of the Year as the Education Secretary.