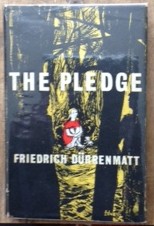 The Pledge by Friedrich Dürrenmatt

This is probably the Swiss novelist’s most famous novel – although that’s not really saying that much because Dürrenmatt isn’t likely to be a name recognised by too many readers today. Published in 1958, it is a crime novel that deliberately seeks to undermine what the author thought were the unrealistic and formulaic detective stories that had come to dominate the market.

The book opens as a generally well-regarded crime author rolls up in a smallish Swiss town to deliver a (rather stodgy and uninspiring) lecture on his craft to a largely indifferent audience. After the event he accepts a lift back to Zurich from a member of the audience who turns out to an ex-chief of police. As the two men talk the policeman voices his criticisms of the crime writing genre – effectively setting out Dürrenmatt’s gripes about the way detective fiction fails to embrace reality:

‘What really bothers me about your novels is the storyline, the plot. There the lying just takes over, it’s shameless. You set up your stories logically, like a chess game: here’s the criminal, there’s the victim, here’s an accomplice, there’s a beneficiary. And all the detective needs to know is the rules: he replays the moves of the game, and checkmate, the criminal is caught and justice has triumphed. This fantasy drives me crazy. You can’t come to grips with reality by logic alone. Granted, we police are forced to proceed logically, scientifically; but there is so much interference, so many factors mess up our schemes that success very often amounts to no more than professional luck and pure chance working in our favour. […] But you fellows in the writing game don’t care about that. You don’t try to grapple with a reality that keeps eluding us, you just set up a manageable world. That world may be perfect, but it’s a lie.’

The two men make a seemingly unnecessary stop at a remote garage-cum-filling station where they take an unpleasant and uncomfortable break and snack. The garage is shabby and the owners seemingly sloppy and indifferent and the crime author gets the distinct impression that the former policeman knows the owners, even though they are reluctant to acknowledge him.

When the two get back on the road it turns out that the stopover was made deliberately to illustrate the story the ex-chief of police is about to tell the crime writer. The rest of the book is taken up by that story.

And what the tale reveals is the story of Swiss police inspector Matthäi, who is in his final day in his current job before he leaves for a prestigious job as a crime liaison officer for the Swiss government in Jordan. News of the brutal murder of a young child whose body has been mutilated comes in and Matthäi takes on the investigation as his last job – knowing he will have to hand in on to his successor. But what he hasn’t factored in is his conscience – Matthäi makes an unguarded pledge to the parents that he will find the child’s killer and this commitment will come to dominate his life.

I have decided at this point that I’m not going to uncover any more of the plot because to do so would be a massive spoiler and you’ll want to follow the twists and turns of it yourself. How Matthäi finds himself holed up in a dead end garage job with an ex-prostitute partner and her slatternly daughter is the reading adventure you’ll want to discover without my interpretation.

What is not a spoiler of course is that Dürrenmatt goes on to show us how, in real life, the solution to crimes is probably never neat and often, along the way, there is a lot of additional collateral damage done to people’s lives. In what is quite a short novel – no more than 180 pages – he drops a disturbing scenario in front of the reader that feels a million miles away from the conventional crime thrillers of the day with their neat and tidy – and just – solutions.

A paperback edition of the book is available for well under £5 although a hardcover will cost you substantially more.