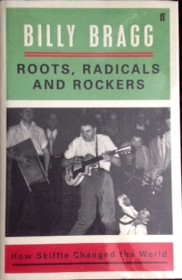 Roots, Radicals and Rockers: How skiffle changed the world by Billy Bragg

Singer-songwriter Bragg proves himself to be the perfect chronicler of that short-lived musical outburst we’ve come to know as ‘skiffle’. Bragg is a very English musician, conscious of his folk and popular working class roots and just the person to capture the skiffle phenomenon which, he shows us, can also be seen as part of the unique way that British musicians synthesized New Orleans jazz and the early roots of rock and roll.

The high point of the skiffle craze was 1957 and I was still a toddler then – so whatever excitement there was around the emergence of this new, bohemian musical form certainly passed me by. For me skiffle has always been something vaguely embarrassing to do with podgy men playing washboards and tea-chest bass players singing vaguely comedy-tinged songs based on American folktales. The big name of the skiffle craze – the man who became its superstar - was the guitarist and vocalist, Lonnie Donigan who, by the time I was aware of him, had become a besuited variety performer peddling dreadful songs like ‘My Old Man’s A Dustman’. This is the stuff of Sunday afternoons, Sunday Night at the London Palladium and the rag-end of music hall. It still makes me shudder just to think about it.

But Bragg makes an energetic, scrupulously researched and almost over-enthusiastic case for seeing skiffle as the punk music of the 1950s. This was essentially a do-it-yourself musical form that rejected the formalities of the New Orleans jazz  that gave it birth and offered teenagers – a whole new marketplace – something to dance to in an age of popular music dominated by Brylcreemed crooners who looked as if they had been put on an industrial buffing machine.

In truth however, skiffle and the internal politics of the skiffle community hardly merits a 400 page book – it is by any standard a pretty slim story and a candle flame that burned very briefly. But to be fair to Bragg, telling the story of the birth, life and death of skiffle is only part of his mission here. In many ways what Bragg has done is to write a sort of skiffle-tinged history of 1950s Britain, setting the efforts of the musicians in a wider social and historical context that lends genuine heft to his claims for skiffle’s significance. Bragg’s excursions into cultural history – the birth of the Teddy Boy craze for example, or the emergence of the teenager as a recognised life-stage in its own right – are actually, for me, more entertaining than the minutiae of internecine band wars.

The biography of skiffle as a musical form is ultimately a thin tale and there’s a danger of the telling of it becoming a bit repetitive. I found it a bit surprising that there are so few reflections from the musicians or the fans themselves. Bragg carries the narrative almost entirely on his own and the authenticity of those who were actually around at the time would have added another dimension – he is a few years younger than me and would have had no first hand experience of what he writes about.

However, these are slightly carping criticisms because I did thoroughly enjoy the book and it’s written with such brio that it would carry you along even if your interest is as marginal as mine was.

The book is now available in paperback and can be found for well under a fiver – as can the hardbacks if you’re more comfortable with those.