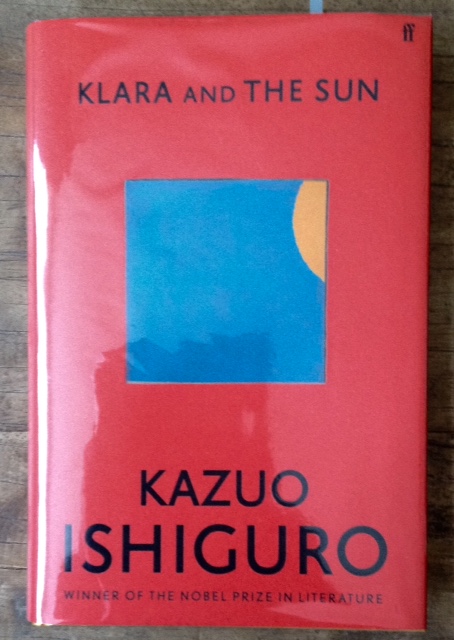 Klara and the Sun by Kazuo Ishiguro

The publication of Ishiguro’s eighth novel seems, if the critical reception is to be believed, to seal his status as one of the world’s premier writers – a view captured by Alex Preston in his review of the book for The Guardian:

“What’s beyond doubt is that Ishiguro has written another masterpiece, a work that makes us feel afresh the beauty and fragility of our humanity.”

Such ringing and virtually universal praise can’t help but make you feel that this is a book that has to leap over all those others sitting patiently in the ‘to be read’ pile and demand to be the book of choice. And so it was. But can it possibly live up to the extraordinary hype that has surrounded it?

Well, rather irritatingly, the answer for me is both yes and no. The narrative is told in the first person by Klara, a solar-powered AF – artificial friend – who is purchased by the mother of Josie, who, it transpires, has an illness that has already killed her sister. Josie’s illness is the consequence of a genetic process of ‘lifting’ which enhances the abilities of the children but can also cause genetic issues such as that experienced by Klara’s new owner. These ‘lifted’ children learn online and as a consequence their social mixing is limited – hence the need for AFs and a series of rather stilted social events where the children are herded together like animals taken out for special exercise. Josie’s closest friend – her only human friend in reality – is Rick who hasn’t been ‘lifted’ but is smart and ambitious. He is, though, conflicted about not sharing in the benefits of being ‘lifted’ because those who have been enjoy special access and privileges when it comes to further education and careers.

This rather dystopian future is described for us in rather naïve and simple terms by Klara who, as our eyes and ears on this world, is herself stumbling to reach some kind of understanding of the mores of this brave new world.

Klara develops an almost religious, certainly a mystical, belief in the power of the Sun to give and take away life. She sees it as her duty to strike a deal with the Sun and in exchange for the Sun’s agreement to cure Josie, Klara will try and disable the dreadful pollution-creating construction devices she calls the ‘Cootings Machines’. What the outcome of this deal is I’m not going to reveal here because it’s a critical part of the story and you don’t want spoilers from me – but the outcome does go right to the heart of key questions such as what it means to be human and whether artificial intelligence can develop morality and a sense of self-sacrifice.

When I picked up  Klara and the Sun I expected that Ishiguro had written a dystopian novel, a warning about the headlong rush to embrace AI. In fact the book feels much more like a modern fairy tale – a feeling that is enhanced and encouraged by the simple innocence of Klara’s voice. As with all good fairy tales, a simple story with a simple narrator becomes an extended metaphor, a Trojan Horse that forces us to confront deep questions at an emotional and almost sub-conscious level.

The tale becomes a chance for Ishiguro to produce a complex novel of ideas and tackle – or at least flag-up – some of the deeply disturbing philosophical and social policy issues that technology, pollution and genetic manipulation pose us as a species. Anita Felicelli writing about the book in The LA Review of Books in March of this year, picks up this point and takes it a step further:

"Klara and the Sun, however, is elegant and haunting and taut. It is best read as a keen, suspenseful inquiry into the uniqueness of the human heart. Is there a soul, something, anything that’s beyond the reach of technology as it marches toward a destruction of everything we know? Through the novel’s drama, Ishiguro offers us an answer. It’s a profound one."

The book is currently only available in hardback but if you want to read novel writing of a high order, you wont delay.