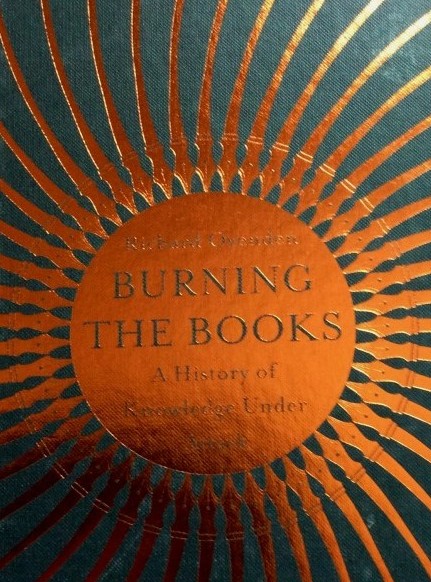 Burning the Books: A history of knowledge under attack by Richard Ovenden

This sterling defence of libraries and archives and the need to defend these reservoirs of human ‘knowledge’ comes from the head honcho of The Bodleian Library in Oxford. As you might expect, it’s meticulously researched and thoroughly efficiently organised and written – but, for me at least, it only becomes compelling in parts. However, those parts are well worth it because when they come along they really zing.

Ovenden’s case is that the urge to bring the sum of human knowledge together in one place (that we have come to think of as libraries or archives) is almost as old as written communication. And for almost as long there have been accidents, threats and attacks on these collections that have led to the loss of irreplaceable manuscripts that leave small but significant holes in our collective understanding of the world.

Ovenden’s approach is to review the history of this endeavour to capture and store knowledge in written form and he organises it chronologically. But, he doesn’t spend much, if any, time on what you might call the philosophical question of what ‘knowledge’ actually is, who is allowed to create it and ultimately, who owns it. These are hugely contested ideas that the author largely side-steps in his determination to give us a narrative that puts the librarian or archivist right at the centre of the world and make them social heroes. And there’s nothing wrong with that in my opinion but I was left a little uneasy that the book overall is so heavily dominated by essentially Western cultural assumptions of what ‘knowledge’ is and its role.

The first third of the book which deals with the emergence of the written word and the efforts made by rulers and influential people to build the first libraries – including the story/myths of the library of Alexandria – had me a bit worried because it seemed to be re-treading the kind of historical detail of book history that I feel I’ve read several times before in a range of other publications. But the book really takes flight about half way through when Ovenden slips into the 20th century and opens up the story of The Paper Brigade. What a story this is! Reviewing the book for The Guardian in 2020, Jonathan Freedland also picks out this extraordinary story of daring and self-sacrifice:

“He devotes a chapter to the extraordinary story of the ‘Paper Brigade’, the dozen Jews corralled in the ghetto of Vilna – now Vilnius in Lithuania – who were forced to assist the Nazis as they collected, sorted and shipped off Jewish books and manuscripts. (The Nazi plan was to save key texts that might be used in a future Institute for the Study of the Jewish Question – a sort of Museum of the Extinct Jewish People.) The Paper Brigade used their position not to assist the Nazi endeavour but to thwart it, rescuing and hiding whatever they could, whether handwritten letters received from Leo Tolstoy or drawings by Marc Chagall. It is a story of ingenuity and deep courage. A postwar postscript yields yet another hero: the Lithuanian librarian who had to save these Jewish literary treasures from a new threat of destruction, this time from the Soviets. Dr Antanas Ulpis stashed the documents in a church, even stuffing them inside the pipes of the organ, where they remained for four decades.”

It’s a truly remarkable story that sent me back to the book Outwitting History by Aaron Lansky – another remarkable tale of how Yiddish literature was saved from the ignominious fate of being pulped or rotting away in forgotten basements.

Ovenden also does a great job of telling the story of the twice-burned library of Louvain University – the victim of two World Wars – and then moves on to more tales of war savagery with the destruction of Bosnia’s Sarajevo library during the Balkan conflict of the latter 20th century. These are certainly stories that need telling before the collective memory packs them away in the mental equivalent of the unopened packing crate.

Inevitably I suppose, he has to end the book with some conjectures about the state of knowledge preservation n the digital age. Again, he is thorough and persuasive about the problems we face with the storage and veracity of digital information. Important as this is – and this might be something about my own advanced age – I find these speculations hard to get emotionally involved with. I know all this is important but I just can’t focus on the arguments. Consider that a confession of my own failings rather than that of Ovenden and his book.