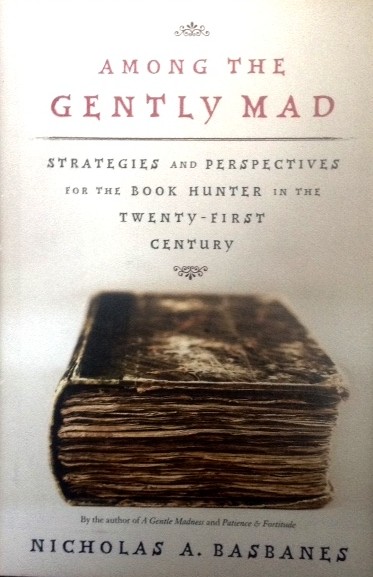 Among the Gently Mad: strategies and perspectives for the book hunter in the twenty-first century by Nicholas Basbanes

U.S. author, Basbanes is bibliophilic aristocracy and he can boast an impressive back catalogue of publications that hover somewhere between the writings of an obsessive enthusiast and a ferocious academic of all things book culture related. Possibly his most famous and influential book has been his historical overview of book collecting and bibliophile behaviour, A Gentle Madness and, of course, it’s that very title that finds its echo in the book that is the subject of this particular review.

Here Basbanes is less interested in uncovering the history of his subject and much more focussed on giving the novice or potential book collector some words of wisdom and a few useful signposts to guide them through the maze.

Reviewing the book in Publisher’s Weekly on its release back in 2002, they noted:

‘To Basbanes, book collecting isn't about making money, but "about gratifying a passion in a sensible way." He urges collectors to buy books that they know and develop specific areas of interest to avoid "buying blind…the most frequently committed transgression in book collecting." ‘

All well and good and there are plenty of useful titbits of information and some sizeable anecdotes here but actually this is a strangely cold-blooded and passionless introduction to the world of book collecting. Basbanes is so urbane that it almost chokes his prose into a sort of lifelessness that’s highly unlikely to inject a whoop of enthusiasm into someone taking their early steps into the world of the book collector.

I used the term ‘bibliophilic aristocracy’ at the start of this review and the rather stuffy rectitude that I associate with any aristocracy pervades the book and prevents it from really living. There’s a set of cultural and social class assumptions built into this book that I’m sure Basbanes wasn’t conscious of when he wrote it. But it’s impossible to imagine that this would be ‘an invaluable field guide for the modern collector’ unless the collector is from a comfortably off, middle class background.

There’s nothing here about collecting at what I’d call ‘street-level’ – trawling the junk shops, the charity outlets and the boot sales. For those of us who have had to build a collection with very limited resources and for who the rarer, most desirable items are things that can only be viewed from a distance.

The notion that ‘good books’ bought shrewdly are always a good investment isn’t something I really needed to be told – it’s surely a truism – but what I really need to know is how that is best achieved on a limited income.

It’s not too often that I find books about books disappointing but on this occasion I have to confess that I found the whole thing rather inert and I can’t see myself recommending it to anyone looking to really understand what the thrill of book hunting can be like. What explains the need to stop in front of any pile of books and give them a quick once over to see if there is anything there that you simply must have? I don’t really know but I know that once you find yourself doing it, you’re a book collector. How much of a book collector will emerge over time.