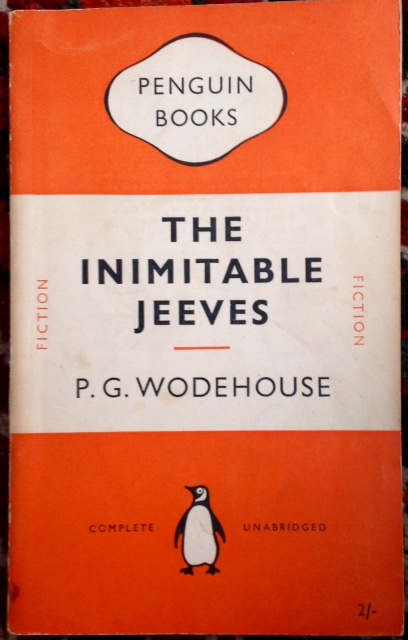 The Inimitable Jeeves by P.G. Wodehouse

Choose to read a Wodehouse and you know exactly what you’re going to get – a carefully created comic world inhabited by a bumbling cast of upper class buffoons and the occasional working class oik, all eventually rubbing along together, falling in love, avoiding or attempting marriage and sometimes more obsessed with their pet pigs than their families. And then, of course, there’s Jeeves; the ultimate gentleman’s gentleman who is in truth the puppet-master general.

What we think of as classic Wodehouse is in fact the latter phase of his development as a writer. His earlier work featured what might be considered standard Edwardian school stories for boys and, following that, an ‘American period’  when he was resident in the United States. The later upper crust/country house world he then developed is a truly odd one but it’s a mark of his skill as a writer that, once we enter through the front door, we’re all happy to accept the house rules. Wodehouse has that indefinable quality of comic timing that persuades the reader he or she is in good hands and despite the fact that this is a world closer to the cartoon or comic-strip than to any sort of reality we are happy to accept the fantasy – at least for the duration of the book.

As George Orwell famously said of Wodehouse, we make a mistake if we see him as any sort of chronicler of the jazz age follies of the 1920s:

“A thing that people often forget about P. G. Wodehouse's novels is how long ago the better-known of them were written. We think of him as in some sense typifying the silliness of the nineteen-twenties and nineteen-thirties, but in fact the scenes and characters by which he is best remembered had all made their appearance before 1925”

The Inimitable Jeeves, published in 1924, is the first full length book introducing us to the Wooster-Jeeves storylines and is a slight reworking of a series of free-standing stories that had been published previously in magazines. From the very start of Chapter One, Bertie Wooster sets up the Jeeves myth for us:

“A most amazing cove, Jeeves. So dashed competent in every respect. I've said it before, and I'll say it again. I mean to say, take just one small instance. Every other valet I've ever had used to barge into my room in the morning while I was still asleep, causing much misery: but Jeeves seems to know when I'm awake by a sort of telepathy. He always floats in with the cup exactly two minutes after I come to life. Makes a deuce of a lot of difference to a fellow's day.

"Anything in the papers?"

"Some slight friction threatening in the Balkans, sir. Otherwise, nothing."

"I say, Jeeves, a man I met at the club last night told me to put my shirt on Privateer for the two o'clock race this afternoon. How about it?"

"I should not advocate it, sir. The stable is not sanguine."

That was enough for me. Jeeves knows. How, I couldn't say, but he knows. There was a time when I would laugh lightly, and go ahead, and lose my little all against his advice, but not now.”

When it comes to shaping and influencing Bertie’s life, very close on the heels of Jeeves comes his formidable Aunt Agatha. What Aunt Agatha says must be obeyed – not, Bertie tells us, because she has any financial hold over him but just by fierce force of personality.

“To people who don't know my Aunt Agatha I[Pg 31] find it extraordinarily difficult to explain why it is that she has always put the wind up me to such a frightful extent. I mean, I'm not dependent on her financially or anything like that. It's simply personality, I've come to the conclusion. You see, all through my childhood and when I was a kid at school she was always able to turn me inside out with a single glance, and I haven't come out from under the 'fluence yet. We run to height a bit in our family, and there's about five-foot-nine of Aunt Agatha, topped off with a beaky nose, an eagle eye, and a lot of grey hair, and the general effect is pretty formidable. Anyway, it never even occurred to me for a moment to give her the miss-in-baulk on this occasion. If she said I must go to Roville, it was all over except buying the tickets.”

Just when Bertie’s life seems to have settled into a nice little rut and his relationship with his Aunt is quiet and comfortable, along comes his big pal, Bingo Little to scupper the tranquillity. Bingo falls in love with astonishing regularity and alacrity and the quest for love he is constantly embarking on seems to always involve Wooster’s wit and wisdom – or more accurately Jeeve’s wit and wisdom.

“…. poor old Bingo was going through it once again. Ever since I have known him—and we were at school together—he has been perpetually falling in love with someone, generally in the spring, which seems to act on him like magic. At school he had the finest collection of actresses' photographs of anyone of his time; and at Oxford his romantic nature was a byword.”

It all seems such a simple recipe but it’s a perfectly flavoured confection and if you surrender yourself to the ultimate good-natured silliness, you’ll have a perfectly lovely afternoon read.