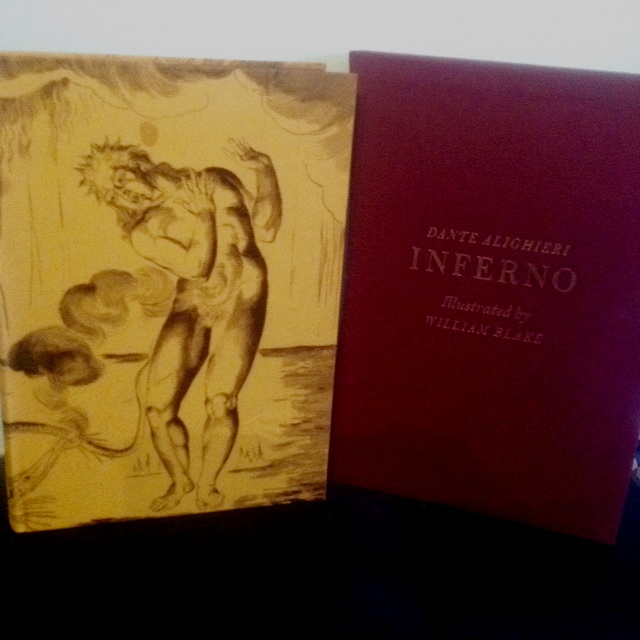 I was intrigued the other day to see that the Sky Arts television channel - which has recently appeared on Freeview- was running a programme entitled ‘Dante’s Creation of Hell’. It’s a look at the wider influence of this part of The Divine Comedy and explores the ways in which Dante inspired other artists to envision the structures of the infernal realm. Dante’s conceptualisation was the first to give Hell shape and dimensions and it seeded a vision in West European art and literature that echoes through to the modern age.

As it turned out, the programme was something of a curate’s egg – good in parts and pretty rotten in others. It seems that television producers just can’t trust great literature and art to speak for itself or to be interesting in its own right and so are compelled to put lots of eerie mood music in the background and fill the screen with close-ups of modern dancers writhing in mock agony. Fortunately the crass dressing of the subject matter couldn’t rob such a powerful source of its inherent magic and the core of an interesting investigation of the power of great art remained stubbornly in place.

What the programme did do however was to reminded me of was just how much I dislike the grey, cold etched illustrations of Gustav Dore and how much I adore the eccentric and colourful depictions of Dante’s Inferno painted by William Blake. It sent me off to find my copy of the wonderful Folio Society edition of Inferno, produced in 1998 in a large format slipcase.

The text has been translated by Henry Francis Cary and there is a short introduction by Robin Hamlyn that helps set the context. But, of course, it’s the symbiosis of text and Blake’s work that is the star show. The Folio Society really do know how to do this kind of big production and they’ve pulled out the stops on this. Even the mustard-coloured cloth boards have their own all-embracing illustration running right around it. Inside Blake’s paintings are each given their own full page frame and reproduced in high quality, subtle colours that are faithful to the originals. Blake is an artist that needs sensitive treatment or the danger is that the paintings look naïve or crass but here they have their magnificence acknowledged.

Well into his 60s and in pretty poor health, Blake was commissioned to illustrate the whole of Dante’s Divine Comedy but, despite working feverishly, it was a project that remained incomplete. The collection of drawings were retained in private possession and were not published until well into the 20th century when the 100 or so drawings were finally pulled together in one volume. For my money, the series of illustrations that make up the Inferno section of the Divine Comedy are by far the most enthralling. All artists it would seem are drawn to the power of Dante’s fevered imagining of sin and the consequences of eternal, obscenely ingenious punishments.

Blake worked all his life on what would have been seen as heretical alternative theological ideas about God and Satan and the destructive role of formal, institutional Christianity. He fought a good many battles with an establishment that he thought was out to get him and was almost certainly fascinated by the notion of ‘sin’ and the fate of the heretic that Dante was envisioning.

What a combination – Dante, Blake and a Folio Society publishing triumph. What more can I say. Just get one if you can because it’s a lifetime feast. Sadly however you may need the thick end of £100 to land a copy.

(If you want to explore Blake's illustrations of Dante's The Divine Comedy, you can start on this link to The Tate )