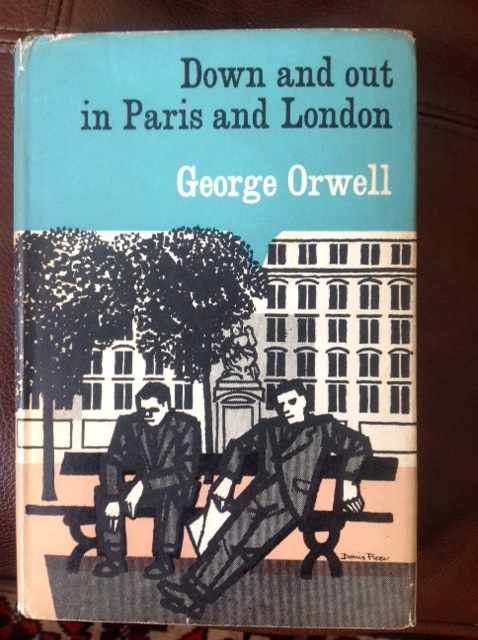 Back in November 2018 I wrote a piece for this site in praise of the book jacket graphics of Denis Piper. Since I published the article I’ve managed to add one more to the collection – Down and Out In Paris and London – but the others have remained elusive in the sort of condition I’d pay good money for. However, the hunt goes on and I’d dearly love to snare 1984 or Animal Farm – although I have discovered that Piper’s jacket for 1984 has also been reproduced as a wall poster but I’m not sure that the design entirely survives being expanded to that size. Book jackets are exactly that and were designed to be most effective at book size.

In the piece I published in 2018, I lamented the fact that I was unable to find out anything at all about Piper, either the man or the artist. Rather more in hope than expectation I ended my article by asking anyone who happened to read it and had information about the artist, to let me know.

Well, the power of the internet has come up trumps and earlier this month and quite out of the blue, I had an email exchange with Michael O’Connell who has been able to do precisely what I asked – to fill in some gaps about Denis Piper. Michael has kindly given me permission to share what he has told me with a wider public and I’m absolutely thrilled to be able to do that here.

“Den (Piper) was a close friend of my father, John O’Connell (who also had a couple of book covers to his name).

Professionally, Piper wore a few hats, as a designer and artist he was a figure well known and in demand in London’s Soho creative scene and could often be found in The French pub or just down the road in the Colony Room. As such he knew just about everybody and counted the likes of Bacon, Hockney and Allen Jones as friends. Book covers were bread and butter work for him and I believe he was given free reign with his designs. He did do other work, I know that the Hamleys toy store was a client of his.

He was also a teacher, which is how my father’s friendship with him began. In the 1960’s he taught at Croydon College, alongside Allen Jones RA and Campbell Bruce, he then moved on to teach at Central Saint Martins. I know that there used to be a photographic portrait of him taken by his students hanging at St Martins - although I’ve not seen it I believe he was wearing a perfectly cut suit and holding a type scale.

He was well known in publishing and ad agencies with a well filled contact book that he used to help his students get into the business once they graduated.

Beyond the visual arts he was an accomplished pianist with a love of jazz. In his time he played at Ronnie Scott’s and wasn’t against travelling to Harlem to play with well-known artists such as Thelonious Monk.

I’m not sure exactly when but I know he served in the forces at one point, rather than being just another soldier though he was positioned in Intelligence, due to this he ended up being extremely physically fit, multi-lingual, trained in martial arts and had a lasting friendship with a female counterpart in Mossad.

Physically, he was just over 6 foot tall, slim, sallow skinned and spoke with a slight lisp. He also smoked like a train (with a mocking mistrust of creatives who didn’t) and drank like a fish - the latter vice unfortunately being his final undoing, suffering from cirrhosis of the liver his doctor told him to cut down to one glass of wine a day, so he ordered Rosé in pints.”

In a second email Michael was able to confirm that it wasn’t just my useless research that accounts for Piper’s absence online:

“There are a few images online of his work, sadly none of him. One piece is in the V&A, called Punch and Judy which he did for Tussaud’s. A few years ago some examples of his early fine art came on the market, sold in Chelsea - which is interesting as I think that was where he lived. I suspect an old friend of his may have died and the paintings were part of the estate.”

He was, it would seem, an extraordinary and maybe eccentric man. Michael tells me:

“There is quite a funny story about his Israeli friend… she used to visit him without notice and stealthily break into his flat and hide, waiting for him to get back home from work. He’d arrive, potter about as we all do and then notice that something had been moved, at that moment he knew what was happening as she’d burst out of nowhere and attack him - just to see if he was keeping in practice. Given the circles he moved in I’ve always wondered if this story was the influence of Kato in the Pink Panther films.”

I suggested that Piper’s life probably deserves a proper biography if a willing publisher was to come forward with a  commission. Michael agreed with this but with an important caveat:

“A bio of the man would no doubt be greatly interesting, the only problem being that the numbers of people that knew him well could quite possibly now be counted on a single hand. He had no family that I know of.”

So, I’d like to put on record my thanks to Michael O’Connell for his part in putting on record information about an artist that would otherwise have remained obscured and potentially lost to future research. This is the value of sharing ideas on the internet and I hope more of this kind of information exchange can happen in the future. And hopefully if we can collaborate in this way over other writers and illustrators who don’t get the profile they deserve we can prevent them from slipping down the back of history’s sofa and being lost to us.