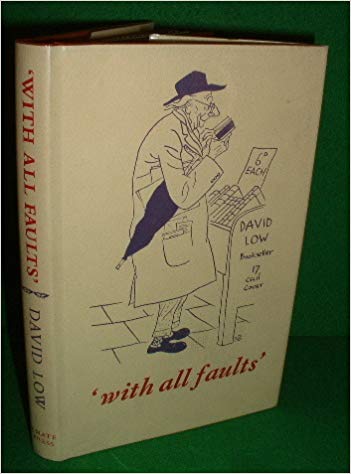 There’s something I find absurdly gratifying in discovering that a favourite author was also a dedicated book collector. I have no idea why but it somehow makes me feel like I have an additional connection to the writer that just reading their books doesn’t necessarily give me. So it is with Graham Greene, who was a book collector all his life, even at the peak of his fame and accomplishments as an author.

After reading John Baxter’s memoir, A Pound of Paper some time ago, there was enough there to alert me to the notion that Greene was pretty savvy when it came to books and book collecting. Baxter went through his own Greene-completist  obsession that resulted in him spending all his time tracking down rarities – especially books the author had signed. Greene it seems was well aware of what desirable objects he would be creating if he signed them and he wasn’t going to make collecting easy for others.

But it was just recently, when I happened upon a modest little book published in 1973 called ‘With All Faults’ by the bookseller, David Low that it fully dawned on me just how central to Greene's identity book collecting was. Low’s memoir is an amiable enough ramble in its own right but the real prize is that it has a preface written by Graham Greene which he did as a gesture of affection towards his favourite bookseller. Greene’s contribution really doesn’t have a fat lot to tell us about David Low but it does tell us quite a lot about the writer's book collecting activities. It amounts to a three or four page essay on Greene the book collector and it’s a very personal and rather intimate portrait.

These are the words of a man who understands what it means to be a collector:

“The value of a collection to the collector lies less in its importance, surely, than in the excitement of the hunt, and the strange places to which the hunt sometimes leads.”

And there’s also a fascinating confession:

“I would have preferred to be a bookseller, but the opportunity escaped me in the war.”

He talks fondly of the fact that even in 1973, towards the end of his career, he and his brother Hugh were still seeking out and collecting the Victorian detective stories that they had such a passion for – “we usually hunt as a couple” – and that he would go anywhere in any weather in pursuit of a possible shop to rummage around in.

In 1989 a limited edition of letters exchanged between Low and Greene was published under the title  Dear David, Dear Graham: A Bibliophilic Correspondence (1989), which also contains some real detail and nuggets of information about what Greene wanted David Low to find for him and what Low was putting to one side in anticipation of giving Greene first refusal. Greene used Low’s experience to help him understand the value of the books he stumbled on but also to share the excitement of the chase. In the example I’ve picked out here, the writer's almost childish glee at his find is almost palpable:

“…a bookshop near the church on the edge of the common. I bought there for two shillings an Order of Holy Week, date 1668 with plates by Hollar, in a beautiful red morocco contemporary binding. It was dedicated to the Queen… I have still got it and I wonder how much it is worth.”

It’s a bit tantalising that this picture of Greene as a book collector is so fragmentary and that it's only possible to get a fractured picture of his activities, interests and thoughts by bolting together bits and pieces from these little glimpses into his bibliophilic world. There’s a fascinating book waiting to be written by someone who is looking for a project or even a doctoral thesis. I’d order my advance copy right now if someone took it on.