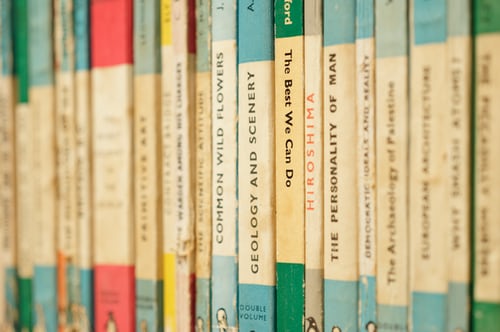 That Letterpress loves Penguin Books and especially old long out-of-print editions of Penguins in all their 1950s, 60s and 70s glory is hardly news. There are at least a dozen articles on the site about Penguin titles that have become iconic masterpieces, either because of their literary stature, their cover artwork, or both (see links below). This earlier piece about the ‘potency’ of old Penguins is a good place to start.

Sir Allen Lane, who founded Penguin Books in 1935, is rightly remembered as the man who revolutionised reading habits and made literature, culture and intellectual ideas accessible to all. It is still astonishing to think that within ten months of launching his new sixpenny (two-and-a-half new pence) paperbacks, a million books had been sold.

But Lane’s almost single-handed redrawing of the entire reading landscape is not what this piece is about, important as that is. What I want to talk about is what old Penguins mean to readers of my generation – and why many of us are still utterly in thrall to them.

Old Penguins are our version of time-travel, their covers as evocative as Proust’s madeleine dipped in lime tea. One taste and we are involuntarily plunging headlong back through the years. But perhaps more importantly, many of us have come to regard Penguins as being synonymous with “books”, a deep Proustian attachment that comes from the fact that to us readers born in the 1950s Penguins represent a period when we were young and discovering not just literature but ourselves, the world, and the culture around us.

Consequently, when I think about certain books, I think of them in the Penguin editions I first encountered them in. This is true of The Great Gatsby with its wonderful cover art by Kees Van Dongen (pictured), Koestler’s Darkness at Noon, Camus’ The Plague (it has to have the Picasso cover), Walter Greenwood’s Love on the Dole or Orwell’s Nineteen Eighty-Four. And there are dozens and dozens of other titles – perhaps hundreds.

I now understand to some degree the wonderfully informed and deeply sympathetic design and cover art choices that were being brought to Penguin books by a generation of talented creatives and artists, many of them refugees from European fascism. (Germano Facetti, for instance, one of the most talented designers Penguin ever had, had fled Mussolini’s Italy where he had been arrested for putting up anti-fascist posters.)

For what these individuals offered, in addition to their superb creative and design skills, was an immense hinterland of European culture. They were the kind of intellectuals we aspired to be, I suppose. Give them an obscure confessional novel by James Joyce’s friend Italo Svevo and they would commission the most perfectly evocative cover drawing by Giovanni Thermes (pictured). Patrick White’s fiercely visionary Riders in the Chariot would be impeccably matched with a portrait from Sidney Nolan’s series of fifty-nine ‘Adelaide Ladies’ (pictured). Virginia Woolf’s Mrs Dalloway would be illustrated with a detail from a portrait of Woolf by her sister Vanessa Bell – all the more mysterious and emblematic for being unfinished, the faceless form suggestive of a free, disembodied imagination but also perhaps a deeper psychic vulnerability (pictured). A minor Iris Murdoch novel would be superbly illustrated by the sculptor and construction artist Malcolm Carder with what looks like a long-lost Pre-Raphaelite martyr (pictured).

What to my mind is one of the greatest Penguin jackets ever designed is that for Koestler’s Darkness at Noon showing Francis Bacon’s ‘Man in Blue V’. The sharply suited figure it depicts has the brutally erased features of a ‘disappeared’ commissar. The steely monochrome striations are as remorseless as Koestler’s prose. This was the kind of pairing that Penguin’s designers excelled at, adding rich additional layers of allusion and meaning (pictured).

For someone growing up in Smethwick or inner-city Birmingham or indeed almost any other 1960s town outside the capital, Penguin books offered a window onto a world we desperately wanted to be part of; they were a cultural education in miniature. The books themselves, the bewitching art work, the other titles mentioned on the endpapers… One felt one’s mind expanding with each purchase. (And sometimes, of course, one felt merely puzzled, butting in frustration against the limits imposed by personal ignorance.)

I’ve never counted how many old Penguins I have but I know that I don’t have anywhere near as many books from any other single publisher. I still have many that were bought for 20p or 30p each in the 70s and apart from a little discolouration they are pristine. Some I have in multiples because I have kept different cover variants – the only books I would do this for.  One particular little clutch consists of five Aldous Huxley novels in the old grey-and-white Modern Classics livery which I bought from a charity shop on Smethwick High Street in 1969 for 2p each. I borrowed the 10p necessary for their purchase. Even now I remember every detail – even who I borrowed the money from.

Old Penguins, then, have done more than form my literary tastes. They have given me an entire cultural education, helping me develop a visual and aesthetic sense, their covers introducing me to artists and illustrators that have become lifelong passions. In short, nothing else that I have bought over the years for such little money has given so much enrichment or such sustained pleasure. Old Penguins: put simply, they make me very, very happy.

The potency of the old Penguin

Discovering The Pleasures Of A Puffin

The Magic of Coal by Peggy. M. Hart : A Puffin Picture Book

Darkness at Noon by Arthur Koestler

Finding John Lehmann at the bottom of a box

See also: Penguin First Editions, a website created with the help of the Archives and Special Collections section of Stirling University Library which houses a collection of 3,500 Penguin Books collected by Dr Angus Mitchell