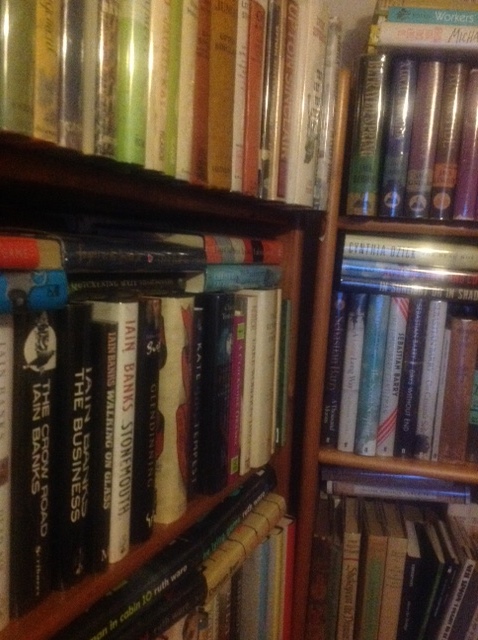 Just too many books?

This year's Hay book festival has come to an end and, for the first time in two or three years I didn't go to see anyone or even go just to take in the atmosphere and pick up some signed copies. To be honest, I really struggled to find authors I wanted to hear speak - those that I might have considered were ones I'd seen over recent years at other festivals and in amongst the morass of semi-celebrities, politicians, BBC journalists and alternative lifestyle gurus peddling their tedious wares, real, substantial literary figures seemed few on the ground.

The Hay Festival organisers rather like the fact that a notable personality ( I think it was Bill Clinton) once referred to it as 'the Woodstock of the mind' but to me that phrase sounds less like an endorsement and more like a terrible warning. The problem is that it's actually quite accurate - the whole event has indeed taken on many of the characteristics of a pop festival. Too crowded, lousy toilets, food you need a second mortgage to buy and headline acts that just have to be seen there or presumably incur the wrath of their agents and publishers. Keep the punters happy and flog them some product.

In Hay, and not just at festival time, you can get the slightly haunted feeling that there just might be too many books around. I know that this sounds heretical coming from a book lover and book hoarder like me but when you find yourself surrounded and inundated by books and there's no element of hard work or good fortune in turning up interesting stuff, some part of the magic of discovery dies. It's all too much like shooting fish in a barrel.

I've come to realise that some of the greatest satisfaction in collecting comes from the unexpected discovery. The uninitiated would be forgiven for thinking that a whole town full of bookshops is like a kind of heaven for a self-confessed bibliophile (and don't get me wrong, there are times when that's what I want) but I can honestly say that stumbling over a box of books in a junk shop or a shelf of neglected hardbacks in a market town charity shop can sometimes be the bigger pleasure. It's all about the thrill of the chase, the capturing of a nugget or gem from the least likely of environments. Finding one book you want in an otherwise arid desert of trash feels triumphant in a way that schlepping from bookshop to bookshop in a town full of bookshops during a literary festival  simply doesn't.

No doubt I will be back to the Hay festival again, probably next year assuming they have some more authors of note and I'm fortunate to live in a part of the country where I can visit the town whenever it suits. But I can pretty much guarantee that in between you'll find me sniffing around looking for books to save from oblivion in the least promising and most unlikely places. After all, you never know what you'll find....