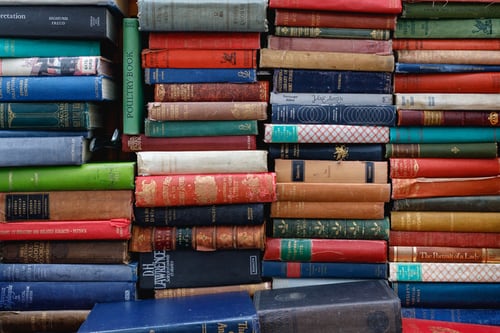 I have a huge collection of books – in truth way more than I’ll ever be able to read before I die even if I did nothing else for the rest of my life. That huge number though is actually only a percentage of the books that I’ve owned over the years because periodically I have a clear-out of stuff that I decide (for various reasons – not all good) I no longer need or want. I do this despite the almost certain knowledge that in a proportion of cases I’m going to suffer terrible remorse over a stupidly bad decision.

I have to confess that, partly as a result of intemperate or impulsive decisions to get rid of titles and partly because I discover something that re-sparks my desire to own a particular book, I’m one of those people who finds myself rebuying something I had before on my shelves and then disposed of. This may seem like a type of insanity to the outside observer and a titanic waste of money – and it is – but I know I’m not alone in this slightly shameful vice. I don’t think you can be an avid reader and book buyer and not, at some point, find yourself doing the very same thing – almost everyone I know who has anything approaching a book collection has done it.

As you can probably surmise from what I’ve been saying, I spend an awful lot of time in bookshops of one kind or another – although second hand ones are my favourites. Even though so many books have passed through my hands over the years and I've sold or donated hundreds of volumes, I’d never come across one being resold that I’d personally owned before and discarded – until now that is.

Standing browsing the shelves of an Oxfam bookshop, I spied a three volume edition of Charles Maturin’s Gothic confection, Melmoth the Wanderer. I read this many moons ago and it’s been my view ever since that it’s a book that promises a lot more than it delivers. The book is a bit of a rag-bag of Gothic horror – stories within stories – that revolve around the idea of a man who sells his soul to the Devil in exchange for additional years of life and then spends his days wandering in search of someone willing to take over the pact from him.

The book had its cult moment around the end of the 19th century and was much loved by the Decadents – including Baudelaire who thought it a masterpiece – and by Oscar Wilde, who was distantly related to Maturin. Wilde actually used the name Sebastian Melmoth as a nom-de-plume and this, I think, gave it an added cache for later readers (me included). Periodically out-of-print for long periods, a small, cloth-bound three volume edition, appeared in 1965 published by Cedric Chivers which I found in the early 1970s still being sold in its first hand condition. I kept it for many years before I decided I was never going to read it again and I needed the shelf space for something else. This was the edition which now sat in front of me, looking slightly the worse for wear and without their (rather discreet and nicely judged) dust jackets. A sort of idle curiosity made me pick up volume one and on opening it I was stopped short by my name, on my bookplate, on the inside free front end paper. After 40 years of separation we had been brought back together in this slightly scruffy charity shop.

I was immediately struck with a deep-seated remorse – why on Earth did I let them go. Look what’s happened to them. Their cloth covers sun-faded, the jackets trashed and thrown away, the paper block-edge starting to fox, unnameable stains on the pages. What kind of barbarian owned this after me and now casts it aside as fit only for a charity shop? I felt a genuine sense of proprietorial outrage.

Suddenly, the fact that it was a book I don’t much rate and that I’m highly unlikely to ever try reading again (and the fact that I’ve got another copy in a different edition) all became immaterial. This had been mine, God damn it, what’s it doing here being mauled by strangers! Perhaps I should take them home, minister to them, give them a place on the bookshelves of someone who cares?

For that brief moment all rationality was abandoned to a wave of sentimental nostalgia. But, I’m glad to report, the wave of sentimentality passed quite quickly and I came to my senses. This wasn’t a very good book. I’ve got another copy I never look at. What was I thinking with that god-awful bookplate?

So I left it behind again. I didn’t succumb and re-buy it. In other circumstances I might have done but I haven’t told you a material fact about the book – they wanted £40 for it. So now at least I know just what the financial limits of my bookshelf remorse are……..