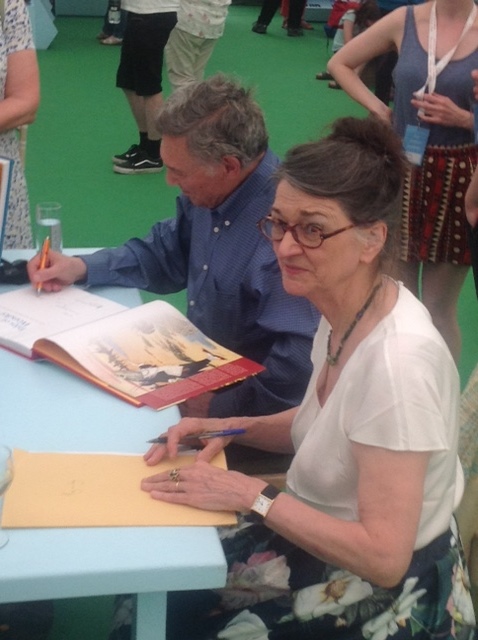 You know when you’ve been at a top rate event at a literary festival when you come away from the tent saying things like, ‘you know, I’d never thought about…’ or ‘that point about….was really interesting’. This hour at the Hay Literary Festival was packed with those moments and was a genuine top quality discussion between giants of their respective genres.

The event was sponsored by the George Ewart Evans centre for storytelling, University of South Wales and the British Academy and chaired by Prof. Hamish Fyfe in an eccentric but engaging style.

Pullman and Warner were there to honour and acknowledge the work of Jack Zipes, now 80 years old but as sprightly as they come. A native New Yorker, Zipes has, at times almost single-handedly flown the flag for the importance of fairy tales, folk tales and what have now been rebranded as ‘wonder stories’. Zipes is a formidable academic but he also has the populist touch when it comes to communicating the value of these tales and he is responsible for rediscovering and translating global wonder stories that would otherwise be lost to the world.

Zipes is a great advocate of the way stories not only capture the essence of human experience but enable the possibility of resistance to tyranny. In a world that is full of increasingly conformist messages, we need these tales of resilience and resistance more than ever.

I was also impressed by Marina Warner’s contributions that added substantially to Zipes’ main argument. I especially liked the way in which she saw fairy and folk tales as resources we can use when we’re constructing our own stories of the world and our past. Philip Pullman was also robust on the issue of the importance of story to the human condition – we are, after all, the storytelling ape who constructs the world through the power of words and narrative.

There were so many great issues that I could highlight but that would become an essay rather than a review of the event. What I can say is that the hour flew by – which is no mean feat in a tent that was boiling hot and on plastic chairs that were designed by Torquemada.

Pullman didn’t join the other two in the signing tent afterwards – which I think was quite a disappointment to a lot of the audience. But Zipes and Warner had a healthy queue to see them and get copies of their latest book, Tales of Wonder, signed and they undertook that task with characteristic good grace.