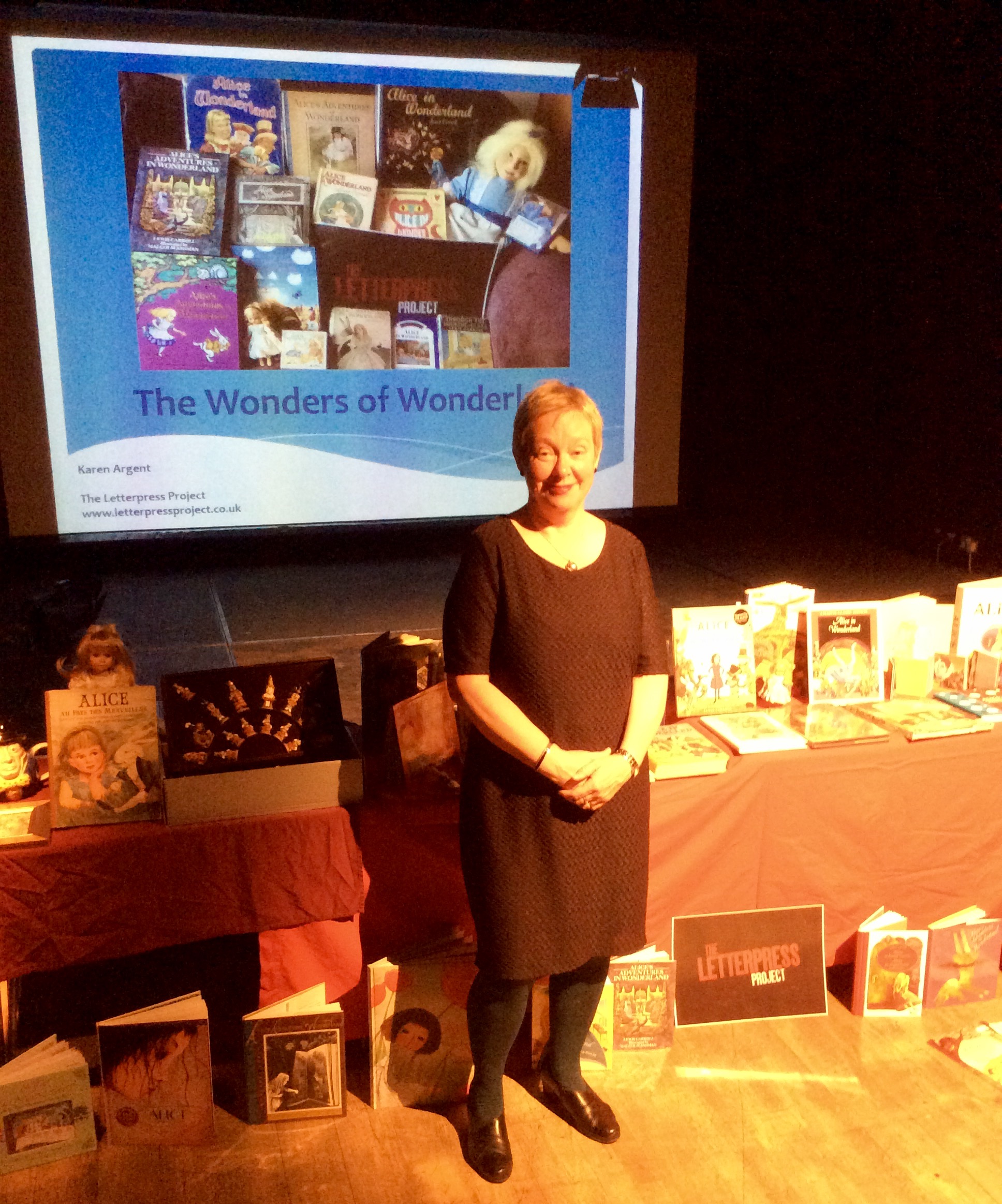 A Weekend of Words in Ludlow

During the summer I was pleased to get a phone call out of the blue inviting me to do some Letterpress Project events at this small literary festival in Shropshire that is now in its third year. I suggested that I should to do one of my classic storybook reading sessions for children in the morning and a talk about my extensive collection of Alice books and related artefacts in the afternoon. And then I sort of forgot all about it until a few weeks ago when I was asked for some blurb for publicity – all fine and dandy. Then last week I  looked at the very  professionally put together festival programme online only to find out that people were being asked to pay £5 for my Alice talk! Panic stations as I decided that I needed to put a power point together rather than just ramble on.  I have of course done a similar talk several times before - but what if the audience was unfriendly or disappointed and demanded their money back?

As a result I spent rather too long preparing what I was going to say, but I needn’t have worried at all because everything went very well. We arrived at least an hour too early as the venue didn’t open until midday but spent a pleasant time browsing the local shops in the Ludlow town centre. I was a bit unnerved at seeing my two events advertised on posters in some shops alongside a later event starring Tony Robinson – fancy little me being billed at the same festival!

My free story reading session only enticed two children which was a shame but I suppose that unless parents and grandparents decide to bring them to me – they are unlikely to make their own way. I enjoyed spending half an hour sharing ‘ The Gingerbread Man’, ‘Going on a Bear Hunt’ and ‘The Gruffalo’ with Otis and Willa who were very lively and enthusiastic. It was also a joy to introduce them to one of my all -time favourites ‘Little Rabbit Foo Foo’ which they had never come across before – what is the world coming to?

Preparing the display for my Alice event in a different room was a rather pleasant experience because I just love playing with my collection, arranging and rearranging it to make it look inviting. I was impressed that I had been allocated my own exclusive technician and steward (another first)! The audience of  fourteen people were all  delightful and when I started off by explaining that I was an Alice ‘Enthusiast’ rather than an Alice ‘Expert’ I could swear that there was a visible relaxation. I realised that they had paid their money because they already had a soft spot for Alice, just like me. The hour passed very quickly and afterwards many of them spent time looking more closely at the books and chatting.

I’m rather glad that my initial anxiety meant that I spent so much time browsing through my books in preparation, because I really don’t spent enough time looking at them. One lady asked which one was my favourite and I’m not sure that I can choose. How on earth can I compare the beautiful softly painted illustrations by Bessie Pease with the more stylised but delicate watercolours by Millicent Sowerby? Who couldn’t like the wispy dreamlike version of Alice by Tove Jansonn and what about the very modern carefree style of Helen Oxenbury? I’m not about to give any of them away anytime soon so I won’t worry too much. I’m also glad that if I ever get a phone call from the organisers of the Hay on Wye or Cheltenham Literary Festival, I can tell them that I have my power point all prepared.