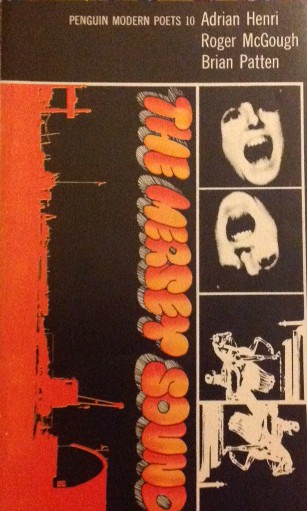 (The first in an occasional series of short articles reviewing the impact of a specific book on my reading history.)

At some point while I was in my fifth ( and, as it turned out, my last) year at secondary school our small, rather haphazard library ordered a run of slim poetry books published by Penguin under the umbrella title Penguin Modern Poets. These certainly looked ‘modern’ compared with the rather fusty old volumes of selected poems by the likes of Masefield, Browning, Tennyson and the rest of the usual suspects too dull to even bring to mind. Slim, colourful and well-designed these selections contained  the work of three new or newish poets emerging in the mid to late 1960s and were there to act as a sort of road-map to modern poetry.

It was, however, Penguin Modern Poets 10, that had everyone talking. Sub-titled The Mersey Sound it came across as the embodiment of the unconventional and iconoclastic late 1960s – challenging to authority, disrespectful of tradition and – glory of glories -  seductively readable. Of course, the link with the then all-conquering Mersey beat pop scene was deliberate and was targeted directly at a young audience who wanted to associate themselves with the new ‘performance poets’ who moved seamlessly between poetry and music (Roger McGough was, of course, a member of the pop group Scaffold who had a number one hit in 1968 with Lily The Pink and Adrian Henri toured with the poetry/music mash –up called The Liverpool Scene).

I can’t really overstate how important this book was to me as a 16 year old who had only recently discovered reading. Not only did this book seem to make poetry something I could understand but also something I could write. I never really had the patience or stickability to learn the ins and outs of poetic metre and so to be able to read stuff that was undeniably poetry that didn’t abide by any rules other than the primacy of impact and sound was a revelation.

Falling in love with this stuff was easy but it took me a lot longer to understand that these three poets – Henri, McGough and Patten – were very different characters indeed and, even later still, very different poets with very different agendas. In many ways the only things they really shared in common were their Liverpudlian origins and a place between the covers of this anthology.

I feel vaguely treacherous confessing that my least favourite amongst the three was Roger McGough – he’s a thoroughly delightful man and he’s signed my copy of The Mersey Sound – but I never really reconciled myself to his penchant for what always seemed to me a rather superficial whimsy. I don’t think it’s in his nature to be vituperative but I always think his poems lacked that vital bit of acid that would pique my interest.  I never did like comedy songs either.

Sadly Adrian Henri died in 2000 and his poems were the ones I adored at the time. He seemed to capture that most elusive of all qualities – the ability to speak directly and only to me. Adrian Henri made himself my pal, the person who understood me and shared my passions – he stuck it to The Man on my behalf. I have, over the course of my life, shamelessly borrowed and plagiarised Adrian’s poetry when I was most at a loss for my own words.

But as time has gone by I find that it’s the poetry of Brian Patten that I most admire – or at least it his work that most often finds its way through the backwaters of my memory.  Patten could (can )do everything  - from the riotously political to the softly intimate – and never seem to miss a beat. I haven’t seen him read aloud but I understand his performances are a knock-out and there is something in the cadence and shape of his poems that just cries out to be performed.

My copy, bought second hand at the end of the 1960s, and now signed by Roger McGough, is a survivor. Astonishingly it is still in one piece – so many of those Penguin’s had glued spines that exploded into dust – and has travelled with me across the country, in and out of  relationships, dodgy bedsits and even dodgier jobs until I sit with it here on my desk flicking the yellowing pages and thinking again about the day I discovered poetry.