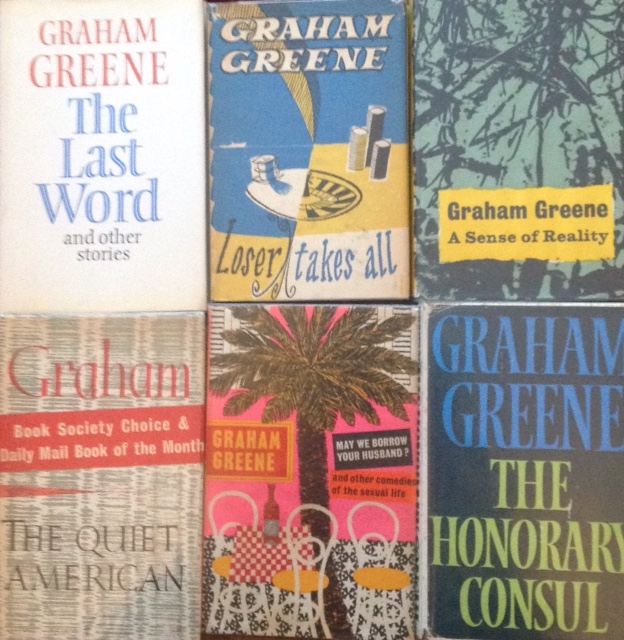 In the 1970s I devoured Graham Greene novels. Given that the 3rd April 2016 marks the twenty-fifth anniversary of his death it now seems extraordinary to think that that back then not only were new Greenes coming out every couple of years, there were also still some late, great novels yet to be written.

Anyway, in recent months I have been re-exploring ‘Greeneland’ – the shadowy, seedy postlapsarian territory in which all of Greene takes place, irrespective of actual geographical location. A Greeneland of the mind and of the world.

After so many years away from Greeneland I felt I shouldn’t just launch into the novels. Where should I begin? With what Greene called his ‘entertainments’ (Brighton Rock, Our Man in Havana), or the serious ‘Catholic novels’ (The Power and the Glory, The Heart of the Matter)?

In order to reorient myself in Greeneland, I began by rereading his two volumes of autobiography – or as close to autobiography as the guarded, enigmatic man who was Graham Greene (or someone very like Graham Greene) ever got: A Sort of Life (1971) and Ways of Escape (1980).

A Sort of Life is still one of the best and shortest primers for those visiting Greeneland. All the key obsessions are there, although you perhaps have to know that you are looking for them. Suburbia (Berkhamsted), guilt and hidden lives, borders and ‘forbidden zones’, sin and redemption.

Ways of Escape I remember being disappointed with when I read it on first publication in 1980, and I still think that judgement is fair. It is something of a ragbag of a book, made up in large part of prefaces Greene wrote for new editions of his books as they were reissued during the 70s.

After this bit of preparation I moved on to the novels. Brighton Rock (1938) is a book I probably haven’t read since I was at grammar school. I found it laborious and plodding then, I recall, overloaded with heavy symbolism. I still think this is the case. It has hugely evocative atmosphere and some fine characters, but I found it needed perseverance to reach the end.

Travels With My Aunt (1969) is Greene’s comic novel and he should frankly have left the genre alone. I’ve tried to read it twice or even three times now and failed each time. It’s facetious and unfunny and laboured and time-locked. It reads like Greene preparing for the flamboyance of the 70s, decked out in paisley shirt, chiffon cravat and velvet flares.

If I had stopped my rereading there I would probably never have opened a Graham Greene novel again. But I didn’t, I went on to what is indisputably one of his masterpieces, The Quiet American. Now everything about this book – its setting in Vietnam during the insurgency against the French, the dangerously innocent American Pyle, the English journalist and fumeur d’opium Fowler, and Phuong his lover – is damn near flawless. It is astonishing to think that over sixty years ago Greene established a blueprint for the playing out of great geopolitical affairs in almost awful intimacy that has frankly never been bettered. (Some will argue that this is what Tolstoy did, and of course this is true, but Greene does it in inimitable laconic style at just over a couple of hundred pages.)

And then I moved on to The Human Factor (1978). I remember being quite sniffy about this when it was first published, thinking it was Greene somewhat cynically writing for the espionage market – stupidly not realising that Greene had already helped create the espionage market (although he, I think, would probably give the credit to Conrad).

In fact his espionage novels (this and The Honorary Consul which preceded it) stand up remarkably well. Arguably, Castle’s wife in The Human Factor never really rises from the page, and overall the book is somewhat antiquated in tone (it could be set anywhere from the 1940s to the 1960s), but I often think that Greene is an essentially Fifties writer and that this is part of his charm. I don’t think we go to Greeneland for modernity. We go to Greeneland for the undeniable thrill of realising that we ourselves don’t have to live there but can visit whenever we feel the need.

So treat yourself this year. Have a rummage on your shelves or in secondhand shops – there’s always some Greene lying about somewhere because so few people read him nowadays (scandalously, even those of us who already own his books). If you can, find some of the glorious old 1960s Penguins with Paul Hogarth covers. Make a cup of tea. Draw the curtains (it will be almost dark in any case and a thin rain will be falling). Settle back. Greeneland awaits.