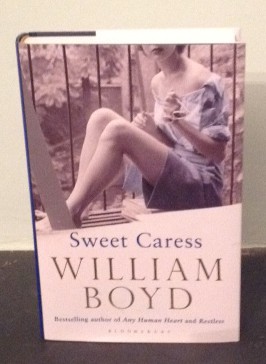 Earlier this week I bought a signed copy of the new William Boyd novel, Sweet Caress. At the same time I purchased two or three other things which were all bundled into a carrier bag which I didn’t look at again until I got home – after all, why would I check them?

As it turns out, I should have because the William Boyd was oddly mutant. Running right down the centre of four pages in the middle of the book were some strips of light blue tape that were clearly holding the pages together in some way. But these hadn’t been applied after the printing process but as part of the printing process – these strips of tape are clearly heat-sealed to the pages. In 40 years of book buying I’ve never seen anything like this – and neither had the shop who were, similarly, totally flummoxed. 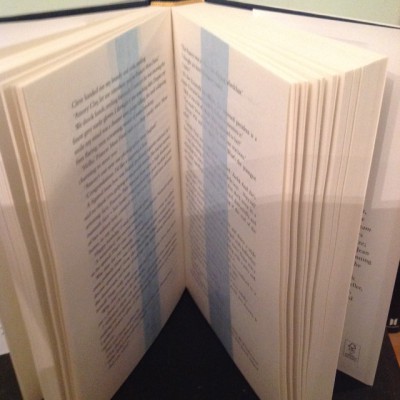 This got me thinking about how infrequently I’ve had problems with damaged or misprinted books – considering the amount I’ve purchased over the years, the disappointment of a damaged or misprinted book is pretty rare. I did buy a copy of Humboldt’s Gift with an entire section missing and I’ve had the problem of uncut pages but, other than that, not too much that couldn’t easily be coped with.

However, I am aware that there is a perverse market for books with odd misprints or mistakes in the production. In recent times the misprints of the British edition of Jonathan Franzen’s Freedom and Harper Lee’s Go Set A Watchman have both become ‘collectible’ and they join a long list of historical error-riddled printings that can now change hands for absurdly inflated prices.  The Daily Finance website has an ‘Investor Page’ which trumpets the headline:  ‘9 Misprints that are worth a ton of money. Do you have one?’. It goes on to list publications that range for the King James Bible to Marvel Comics but it’s not until the end of the article that we get the important bit:

“As with all collectibles, there's a very big catch: Your goodies are only worth something if someone is willing to pay for them.”

Of course it’s inevitable that small misprints creep into any large scale typesetting exercise like book publishing. These misprints frequently go unnoticed by readers and publishing houses usually make corrections for second and subsequent impressions. Indeed, these small errors can become vital clues in establishing whether a book is a true first printing or not but other than that they seem to me to be largely inconsequential.

However, I’m perplexed about why it is that some people seem to think a damaged or misprinted book is ‘collectible’ – surely the key characteristic of these books is that they don’t function properly as a book! It seems to me that people who want these items aren’t at all interested in the book itself but in buying some more intangible thing called ‘rarity’. I can’t help but draw parallels with stamp collecting where, as I understand it, misprints on stamps can make rare editions more desirable.

Ultimately I can't help but feel that there is something depressing about gathering these artefacts together as if they are specimens to be displayed for their freakishness.