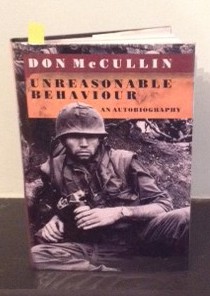 What does war do to photographers?

At this year’s Cheltenham Literature Festival I had the great good fortune to spend some time listening to Don McCullin being skilfully encouraged to talk by the outstanding Times war correspondent, Anthony Loyd. McCullin knows Loyd well and, despite McCullin’s age, they were both recently inveigled into taking a six day trip to Syria  where, McCullin claims, he failed to take a single decent photograph. Maybe, he speculated, six months was a more realistic time scale for a photographer to hope to get a shot that shows he understands the place he’s in.

McCullin is infamously grumpy about his public notoriety and is clearly not a man to tolerate fools and , as far as I can tell, simply hates these book promotional events. So Loyd was probably the only candidate capable of doing this session and the fact that he was sharing the stage was probably part of the inducement for McCullin to put in an appearance.

The young, raffish, devil-may-care firebrand photographer that McCullin was when I first encountered his work has, understandably, been replaced by a man who thinks carefully before he talks and is happy to acknowledge his youthful exuberance and his thoughtless and impulsive commentary on the world and all its doings. If this is a man who has matured and tempered, he is still a man committed to his mission to document the essence of human experience – whether in war or on the streets of the towns and cities we live in. I still detect pride in his retelling of how he put together the guerrilla poster campaign in 1968 designed to expose the inaction of the Wilson government over the suffering in Biafra.

But the unmistakeable truth is that McCullin is a man haunted by the ghosts of the war and suffering he has witnessed. How could any man document the terrible carnage and the senseless slaughter he has seen and not be constantly catching the shadows of the dead in the corners of his eyes? Was it just my imagination or was McCullin carrying some unspeakable invisible burden on his back – a succubus that he can never be rid of?

This got me thinking about the whole notion of war and war photography and what war did to these men. Photographers like McCullin made the whole notion of war photography an explicitly political act and in doing so gave it a perverse glamour – something the counter cultures of the Sixties and early 70s were ready for and eager to embrace. We wanted the photographer to be the conscience of the world – young men blagging their way into war zones with beat-up cameras and endless rolls of Tri-X Pan film pushed to produce super-grainy black and white prints glowing off the pages of Sunday Times magazines. Look, we would be able to say, at the true nature of the military machine and it’s indifference to civilian life and frail human flesh. These cameramen were our pacifist vanguard. 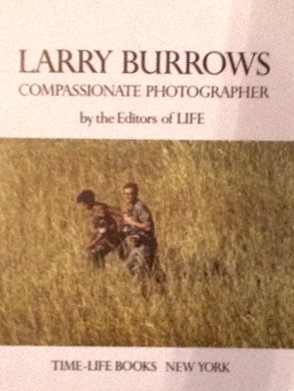 But at what price? McCullin isn’t the only photographer to willingly embrace visions of Hell and come back to tell the rest of us what it is like. Robert Capa, Larry Burrows, Tim Page – all of them terribly damaged mentally and physically and sometimes terminally. All of these men have, at some point, been called plain crazy and there is always the lingering suspicion (never one which can be proved) that they have some kind of death wish. I personally discount the death wish hypothesis but what I do think it is legitimate to ask is whether it is the experience of war that shapes the world view of the photographer or whether they seek out these flirtations with the truly base and evil manifestations of humanity that war represents because they are drawn in some way to the dark side.

The interview with McCullin in sedate and leafy Cheltenham left me thinking that his trip to his own dark corners has left him with no way back from some place of dreadful suffering.