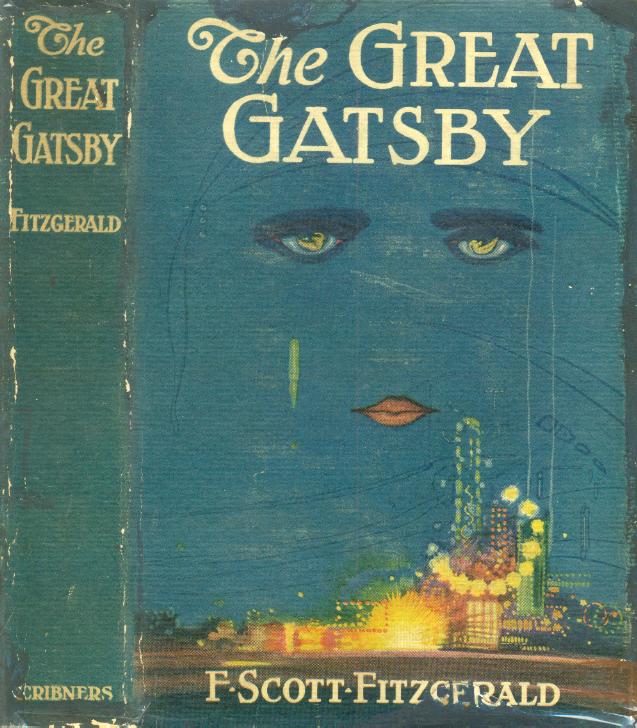 The Greatest Book Jacket Ever?

I doubt that anyone would ever try and claim that the world of book collecting is the most rational environment you will ever encounter. Just try explaining to a non-believer why a first edition book is so much better than a second printing or even a paperback that contains all the same words and watch the look of patronising incomprehension spread across their face. So telling them that actually, in some cases, the paper dust jacket the book is sold with is actually worth more than the book itself is more than likely to get them seeking medical help for your obvious mental breakdown.

However, it’s true and when I say the dust jacket is sometimes worth more I mean considerably  more. One case in point is the dust jacket that originally accompanied the first edition of F. Scott Fitzgerald’s The Great Gatsby  (pictured). The good folk at AbeBooks have produced a short video in which they claim that this jacket is so rare and desirable that it added $100,000 to the auction price of a book that might otherwise be worth about $8,000 without it. So why has this seeming insanity driven otherwise balanced and intelligent people to pay so much for a scrap of printed paper?

Well, I guess it starts with the book as a piece of art. Gatsby is by any assessment an important cultural landmark in the history of American 20th century literature and so the jacket will naturally take on some of the reflected glory of the writing itself. It’s hard to imagine a book jacket, however marvellous it is in terms of design, would have this kind of status if it found itself wrapped around a disposable pot-boiler.

But the jacket itself is much more than a cover to a great book. It’s iconic because it helps create the book’s mythology. Whilst it isn’t an image that illustrates the action or characters of the story, it does represent the spirit of the age – in the glamour and the sparkle of the lights set against the deep inky blue/black of the ‘sky’ the Jazz Age is mysteriously evoked. The hovering, all-seeing eyes might have an echo in the eyes of the advertising sign that plays it’s part in the plot of the book but that is just a secondary issue. These eyes are the eyes that tell you something more profound  – that the days of excess are leading to tragedy.

In this sense, the jacket is an experience of it’s own as well as an enhancement of the novel and for the reader it’s a critical part of the structuring of an atmosphere that is key to the impact of the book. Subsequent reprints that have used other images (usually from the movies that have been made of the book) lose something essential by not plugging in to the power of original jacket to help create the reader’s mood.

I’m not sure whether I think this is the very best book jacket ever but I certainly think it’s up there with the very best. There are others I’m particularly attached to which don’t have anything like the same cache or financial clout but which do a critical job for me in helping put me in the right mood; I’m thinking, for example, of the original jacket for Catch 22  and To Kill A Mockingbird.

I suspect that there are plenty of candidates for the very best book jacket – what are yours? – but I bet there are very few that can command a price tag of $100,000. Maybe we’ve under-valued book jacket art for too long - $100,000 would probably not seem too extravagant if were attached to a piece of fine art we can hang in a gallery but we are uncomfortable to this sort of price for a piece of graphic design. Good book design is art and good art is ultimately rare and this in turn brings with it a monetary value that has the power to shock.