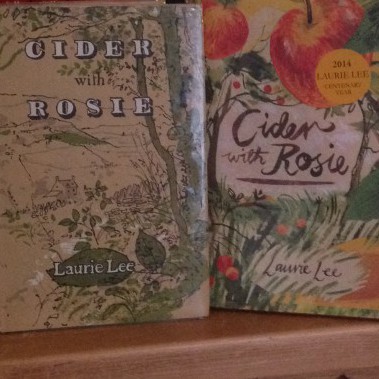 This is one of my all- time favourite books that I first read when I was about sixteen and have returned to many times since. Every time I read it I find different parts to enjoy. Why do I love it so much? Probably for the same reasons as other people – it sold over six million copies and received fabulous reviews when first published in 1959, and the centenary of Laurie Lee’s birth last year brought a fresh tide of positive accolades. The language is beautifully crafted throughout, the major and minor characters are vibrant and the descriptions of the countryside around the village of Slad where he lives the majority of his childhood ‘like living in a bean pod’  ( p.33). Whole chapters focussing on subjects like ‘The school’ provide a distillation of an experience that resonates – even though my own experience of school was substantially different. He does not feel that school taught him a great deal other than how to get along with people. He describes it as:

‘a conveyer belt along which the short years drew us. We entered the door marked ‘Infants’ moved gradually to the other, and then were handed back to the world.’ (50)

Already a well -established and highly rated poet, journalist and travel writer, Laurie Lee was offered £500 by the Hogarth Press to write his autobiography in 1957. It was to form the first volume of four parts which were published at long intervals during the next thirty years: As I Walked Out One Midsummer Morning (1969); I Can’t Stay Long (1979) and A Moment of War (1991). After two years he completed the book having spent some time deliberating over the title. Early manuscripts show that he toyed with many titles eg Boy in ice and That summer park and several girls names eg ‘Cider with… Gwen/ Joan/ Carrie/ Poppy’

Despite the now iconic final title, it was published a year later in the US with a very different title: The Edge of Day. Perhaps this was because an association of childhood with alcohol was deemed to be inappropriate? Again – it was very well received and one of the early reviews by William Maxwell in The New Yorker explains that it is:

‘Beautiful, rich, full of stories, full of the humour that fountains from unsuppressed human beings, full of intelligence and point, full of damn near everything’ (Lee, 2014, p.239)

The book is sometimes described as a hymn to women and the love for his mother, the redoubtable Annie Lee shines through, for example on washing day: ‘rowing her arms like oars in the steaming waves’ ( p.7). When it was published, she was delighted with it especially as she had helped with reviving many memories while he was writing. His wonderful ‘generous, dotty and indulgent’ sisters, Marjorie, Dorothy and Phyllis are also central to his early life. Who can forget the moment when we first meet them as little three year old Laurie is lost in the tall grass when they first arrive at the cottage:

’Faces of rose, familiar, living, huge shining faces hung up like shields between me and the sky’; faces with grins and white teeth (some broken) to be conjured up like genii with a howl, brushing off terror with their broad scoldings and affection. They leaned over me- one, two, three- their mouths smeared with red currants and their hands dripping with juice’ (p.2).

It is an autobiography of a time and place that goes beyond an individual life – again this is what makes it special. You will have your favourite parts I am sure but I’ve decided to take a Desert Island Discs approach and select eight perfect moments that I treasure for different reasons. This was a very difficult task because I could have chosen at least fifty…

1.The gradual early understanding of himself and his environment:

‘I could open the kitchen door by screwing myself into a ball and leaping and banging the latch with my fist. I could climb into the high bed by using the ironwork as a ladder. I could whistle but I couldn’t lace my shoes’ (p.5).

Then he explains how he learns to navigate the complicated and mysterious landscape of his family home:

‘From the harbour mouth of the scullery door I learned the rocks and reefs and the channels where safety lay’ (p.6).

2. The cosy luxury and safety of sharing the bed with his mother, until he is usurped by his younger brother Tony:

‘ so in the ample night and the thickness of her hair I consumed my fattened sleep, drowsed and nuzzling to her warmth of flesh, blessed by her bed and safety. From the width of the house and the separation of the day, we two then lay joined alone’ (p.19).

3. The indignation and feeling of betrayal after the first day at school:

‘They said they’d give me a present’

‘They did! They said: “You’re Laurie Lee, aint you? Well, just you sit there for the present.” I sat there all day but I never got it. I aint going back there again!” (p.36)

4. Eating porridge in the morning in the family kitchen:

‘At last the porridge was dabbed on our plates from a thick and steaming spoon. I covered the smoky lumps with treacle and began to eat from the sides to the middle. The girls round the table chewed moonishly, wrapped in their morning stupor.’ (p.59)

We learn how the two ancient cantankerous women living adjacent to the Lee family are lifelong mortal enemies with seemingly little purpose in life other than to compete with one another and find bad things to say about one another. This continues right up to the funeral of Granny Trill when Granny Wallon disgraces herself by screeching in outrage at the graveside that her rival has lied about her age and has to be physically carried off ‘struggling and crying, kicking out with her steel-sprung boots.’ (p.86). I was particularly impressed by Granny Trill’s tragic Fairy Tale like story, told repeatedly to the Lee children,  about her own childhood  when, having lived in the woods with her widowed father, ‘a woodcutter, strong as a giant’ (p.77), she grew into a beautiful young woman. At the age of fifteen he suffered a fatal accident when a tree fell on him:

‘She clawed a hole with her hands and lay down beside him, and held him until he died. It took twenty four hours, and she never moved, nor did he speak again.’ (p.78)

6. The Blacksmith and the toffee maker

His mother tells many stories over the years including one about a couple who are desperately lonely and shy: ‘with the years the spinster’s desperation grew, as did the blacksmith’s speechless passion’ (p.24). At last she goes to pray for help and he , hidden up in belfry ending the clock, hears her prayer‘ tunes his voice to Jehovah’s, and boomed ‘ Will a blacksmith do?’ Did it really happen? It doesn’t matter because it was part of the landscape of Lee’s childhood and was told over and over again.

7. The lone voice of Boney the carol singer

‘ Far way across the fields from the distant village came the sound of a frail voice singing, singing ‘ Noel’, and singing it flat- it was Boney, branching out on his own’ ( p.140)

8. The picnic with the reluctant sweethearts of the three sisters

The deep embarrassment of going for a picnic with someone else’s family, where the rules are unknown. This is a particularly baffling experience for the young men who are courting the three sisters. In this scenario we are given a flavour of just how eccentric his mother is: ‘ The young men swapped curses under their breath, brother Harold hung back in shame, while Mother led the way with prattling songs determined to make things go’ (p.2230.

In the introduction to the beautiful anniversary edition, Michael Morpurgo (2014: ix) explains why the book is so special to him:

‘When I first read Cider with Rosie a long time ago now, as a student, I did not realise how profound would be the effect on my life. I remember even then being mesmerised by the beauty of the prose – a prose poem, a narrative poem, I thought, a word painting. This was Hardy and Hughes and Heaney, Breughel and Rembrandt and Van Gogh, but in Gloucestershire, and in a time only just past; almost my time, but not quite.’

He makes the important point that this is not a sentimental view of a childhood- it includes ‘wretchedness and loneliness and madness’ and plenty of death. He links this to what Thomas Hardy described as:

‘ the old association’, that tight interweaving and understanding of landscape, village, family and self to be founded only in the remotest of communities where the outside world intrudes little.’(p.x)

I would argue, with many others over the years, that this book definitely fits the criteria associated with a ‘classic’ work of literature. It can be re -read many times and the reader will always discover different things in the text; it has survived more than one generation; it chimes with individual memories across class and culture; and it has been reinterpreted in many forms (including many different illustrated editions; audio; dramatic and TV formats) and a range of languages without losing its central narrative. I hope that I will have the opportunity to read it again many times.