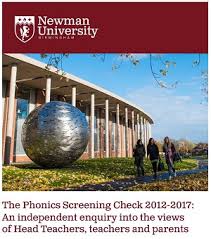 The Phonics Screening Check 2012-2017: An independent enquiry into the views of Head Teachers, teachers and parents by Margaret M. Clark OBE

This research has been published on the Newman University website. The author has provided the following introduction to the report

"Should synthetic phonics remain mandated as the only way to teach all children to read and the Phonics Screening Check remain a statutory assessment in England for all six-year-olds? There is overwhelming evidence ignored by government that does not support the government’s current literacy policy and the claims made for it. Yet on every occasion he makes a speech or writes The School Standards Minister and others continue to claim it is backed by research and has dramatically improved attainment. Teachers or parents have not been consulted on the Phonics Screening Check or the mandatory policy of synthetic phonics as the way to all teach children to read. My intention is to request a consultation involving researchers, teachers and parents as to whether the Phonics Screening Check should remain statutory in view of its adverse effect on practice and whether a major criterion for funding by DfE should continue to be support for synthetic phonics."

The author, Margaret M. Clark OBE  was elected in 2018 to The Reading Hall of Fame for my distinguished contribution to literacy research, theory and practice. She has helpfully provided the following list of her research sources and evidence:

Clark, M.M. and Glazzard, J. (eds.) (2018) The Phonics Screening Check 2012-2017: An independent enquiry into the views of Head Teachers, teachers and parents.  Final Report September 2018. Available to read and download from Newman University.

See chapter 2 for a summary of other researches. Other articles can also be read and downloaded from  there. See Appendix II for details of funding allocated to synthetic phonics programmes by DfE..

Clark, M.M. (2018) ‘The views of teachers, parents and children on the Phonics Screening Check: the continuing domination of politics over evidence’. Education Journal Issue 347: 20-23.

___ ‘How justified is it to dominate government policy on early literacy with synthetic phonics and the Phonics Screening Check? Part II A critique of the evidence. Education Journal. 352:  15-19.

Published evidence on synthetic phonics and the Phonics Screening Check up to 2015 (Summarised in Clark 2014, updated in Clark, 2016).

The first edition self-published won the UKLA Academic Book Award in 2015, then Routledge published the revised edition in 2016.

Two edited books with extensive references to research challenge the claims by the government in England that current literacy policy is evidence-based.

Chapters from these are cited in  the two articles in the Education Journal Issues 351 and 352 available on the same link as the final survey report.

Clark, M.M. (2017) Reading the Evidence: Synthetic phonics and literacy learning. (editor and contributor) Birmingham: Glendale Education. From Amazon.co.uk. Paperback and e-book. (This has six additional contributors from UK and Australia).

Clark, M.M. (2018) The Teaching of Initial Literacy: Policies, evidence and ideology (editor and contributor). Birmingham: Glendale Education. From Amazon.co.uk. Paperback and e-book, (This has twelve additional contributors from USA, Australia, The Republic of Ireland, Northern Ireland and UK). (Chapter 5 on PIRLS is available on the link to the survey report).

Critiques of the two researches cited by government in England as the evidence-base for current policy mandating synthetic phonics as the only way to teach all children to read:

The Clackmannanshire research and recently also the National Reading Panel Report from USA. Allington’s edited book has contributions from members of the panel raising issues about claims made for that report. Part I is entitled: ‘Unreiable Evidence… ’ and Part II ‘Politics, Policies and Profits: The political context of the National Reports’ . In addition to references in my edited books, Clark, 2017 and 2018 a further source for a comprehensive critique of the Clackmannanshire research is Ellis and Moss, 2014.

Clark, M.M.(2018) ‘What determines literacy policies: evidence or ideology? The power of politicians over policy and practice’ Education Journal Review Vol. 35 No.2: 2-30.

____ ‘A knowledge-base from which to debate central government’s domination of literacy policy and practice in England. A plea for a research literate profession’. Education Journal. Issue 359: 18-22. NB Education Journal Special Issue II will appear shortly with a selection of my articles from 2018 and will be put on the same link as the survey report.

We are currently undertaking an independent survey of the content of programmes for initial teacher education in England to explore the extent to which they are dominated by the demands of current policy in England.