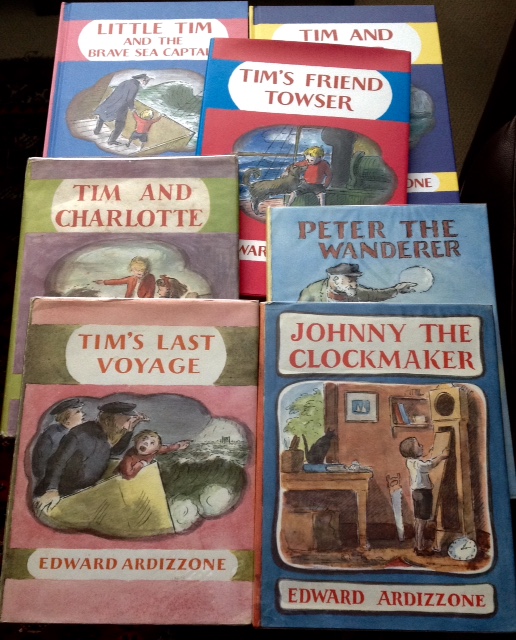 I have just found a 1950s original of ‘Tim and Charlotte’ by Edward Ardizzone and paid the absurdly small price of £4 for it. That’s a pretty remarkable price for an author and artist whose reputation continues to increase from year to year and considerably cheaper even than the modern reprints of the 'Tim' books that have come onto the market in recent years. Ardizzone’s reputation as an illustrator is such that his own books, and those he decorated for other authors, have become much sort-after and pretty expensive in their first edition state. So, it’s not a surprise to find that facsimile–style reprints have proved a popular alternative for those who want to have them in their collections.

To be honest, unless we have a bit of luck and come across a bargain like the one I have just found, we can’t afford to buy the first editions and have fallen back on the modern reprints. So, given that you can now get these moderately priced facsimile copies, why would you spend so much money on the first or very early editions that have no additional or different content?

The answer is hard to covey convincingly without having the books in front of you to look at but the best way I can describe it is that the reprints lack texture and dimension, they feel flat and simply don’t ‘live’ in the way the originals do. The colours, the texture of the drawing as it is reproduced and the quality of the paper they are printed on all work together in the older editions to give the pages a depth and an almost three-dimensional quality. All this is somehow missing from the reprints.

I don’t know enough about the printing process, the use of inks and the types of paper available to be able to explain why that is – all I’m able to talk about is the experience of the books from a reader’s perspective. Looking again at the copy of ‘Tim and Charlotte’ that I purchased, it seems to me that the feeling that it’s a superior artefact might well be about more than these technical issues (although they are obviously significant) and could have something to do with how a book ages more generally. It’s hard not to sound like I’m trying to say something obliquely mystical about old or antiquarian books here but an old, previously well-read book seems to contain a more tangible life or even several lives. The jacket has wear, there is a slight grubbiness where fingers have held the book and jacket, the inside pages have indefinable marks and modest little stains that have been left behind by previous readers. Rather than detracting from the book, these all seem to add texture but more than that it feels as if the book has had a life. Just in the same way as a human face ages with its lines and its experience of life giving it character and personality, so these older books have a deep-grained face to present to the world.

I think this is true of all older books but especially true of illustrated books and illustrated children’s books in particular.

Ardizzone’s children’s books provide a perfect example of all of this. The new reproductions are accurate, scrupulous and affordable but they just don’t have life. I think I’ll hang on to the reprints until I have more lucky finds and, where I can, I’ll switch to older copies because I think I’ll be getting something more than just a faithful copy.