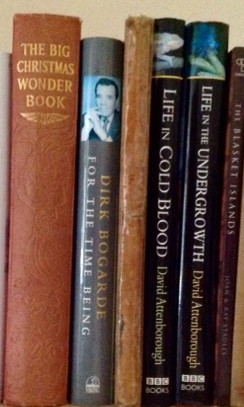 My elderly parents have rather an eclectic book collection. Some classic fiction, poetry, nature books, local history and biographies along with some surprises. Looking at one of their bookshelves recently I noticed a slim one without a title on its tatty spine snuggled between 'Life in Cold Blood' by David Attenborough and 'For the Time Being' by Dirk Bogarde. As I pulled it carefully from the shelf I experienced a rush of nostalgia. In a few seconds I was back in my bedroom as a six year old playing libraries with my dolls and teddies. Whether this particular game was a hint of my future love of books I'm not sure, but 1950s children had to rely a lot more on imagination for entertainment more than twenty first century children ( gosh I am turning into an old biddy)! 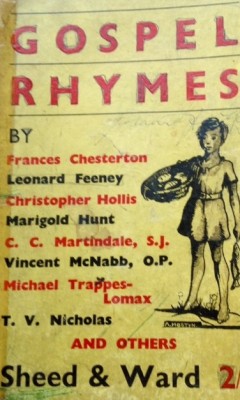 The book was 'Gospel Rhymes' - a collection of poems by a range of authors with interestingly enigmatic names like C. C. Martindale, SJ ( presumably an acronym for Society of Jesus), all inspired by biblical texts. I remember the deep yellow cover so well with the black and red text and the picture of the smiling boy with the loaves and fishes. Even all those years ago it was very well thumbed and grubby because I remember being told that it had belonged to my mother as a child. It is also liberally vandalised with pencil drawings throughout,  which I suspect  may have been done by me as I can't imagine my mother or her sister daring to do this in a quasi religious book. Despite its very poor physical condition, it had clearly survived various clear outs and several house moves over the years. Now it was badly foxed with pages barely held together with plenty of discoloured sellotape - so why was it still there among the more pristine books? 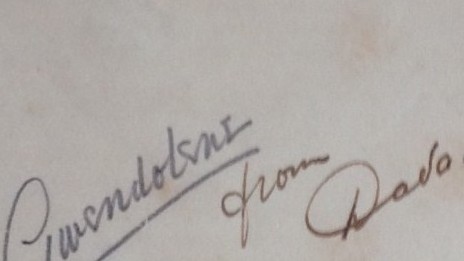 My mother explained that she had always cherished the book and would never get rid of it because it carried so many fond memories. She grew up in a very traditional Roman Catholic family and remembered that it had helped her to better understand what she had heard in church. The family didn't have much spare money for books and so the few that were bought as gifts were treasured.They didn't have any extended family or many adult friends so no presents from that source either. She tells me that it was published by Sheed and Ward, specialists in religious texts. Mr Sheed was apparently an acquaintance of her father so perhaps that is how he acquired the book, as he had several others. Barbara Ward ( possibly a wife or daughter of Mr Ward ) was very active in the RC circles  my grandpa moved in at the time. The dedication: ' Gwendolene from Dada' shows that he originally gave it to my aunt as a present. 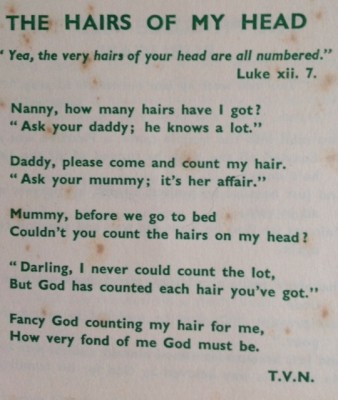 I can't say that I liked the content of the book very much and particularly remember being worried about the poem ' The Hairs of my Head' by T.V. Nicholas which suggested that I should be reassured that God knew how many hairs I ( and presumably everyone else in the world ) had on my head. Even at six I was rather dubious about this because why would he be interested in something so trivial and, more importantly, what about bald people? 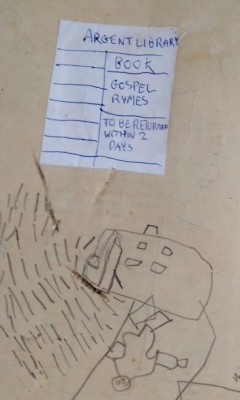 What really delighted me about this trip down memory lane was that one of my carefully hand written library tickets was still stuck in the back of the book. I can vividly remember doing this with all my books and feeling a bit naughty because I wasn't sure if it was allowed. I didn't own a huge number of books at this time as tended to borrow every week from the local library but for some strange reason this is the only one I remember. My mother definitely wants to keep it on her bookshelf for now but has promised to leave it to me. Fortunately I don't think anyone else in the family will be too bothered.