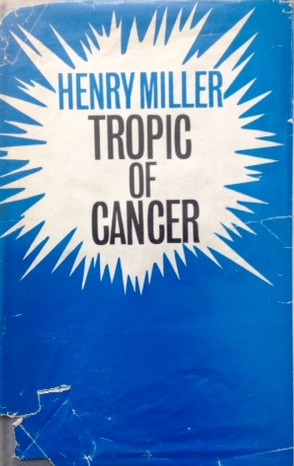 Tropic of Cancer by Henry Miller

It’s been over thirty years since I first read this book. I was astonished by it then and I find that I have been astonished again this time around. Many critics and commentators have done a better job than I ever could at describing the impact and longer term influence of the book on those who came along after and admired what Miller was trying to do. But, for me, it’s not its importance in literary history that fascinates me but the astonishing immediacy of Miller’s voice that is still able to speak directly and without artifice to the modern reader about the universal passions of humanity.

Published in 1934, the book was an instant cause celebre – banned and reviled by the social and literary establishment for its depravity and corruption and championed by those who saw in Miller’s debut an important new voice with a wholly fearless, original perspective on life. The book has no ‘plot’ as such, it’s a fusing together of personal diary and fictional embroidery that tells the story of a character, Henry Miller, and his determination to find personal, creative and sexual freedom in Paris. The potential confusing of the identity of the Henry Miller who is the book’s central character and that of Henry Miller the author, is entirely deliberate. For both of these Millers, there can be no compromise, no falling back onto conventional ways of living a life and earning enough to pay your way: taking that path, Henry Miller asserts, is the road to serfdom.

In his desire to stay free of conventional constraints, Miller finds himself scavenging a living on a day to day basis – sponging off friends, sleeping around, doing the very occasional bit of work in exchange for meals. He lives in squalor – filth and degradation are the commonplace experience of Miller and virtually all his acquaintances. The dialogue is unbridled, uncensored and owes nothing to conventional novel structures – there’s no political correctness to be found here, many of the attitudes to gender and race would now be thought of as regressive but, despite all this, it is also rich, shocking and real.

George Orwell was one of the first to champion Miller’s book in his essay Inside the Whale (1940) and it was Miller’s capacity to cut through the artifice of most literary writing and present the viscerally real that Orwell appreciated. He contrasted Miller’s passionate commitment to the inner life with the dull sterility of much political and worthy writing – at a time when so many felt it was necessary to be active and politically engaged, Miller, Orwell maintained, focussed on the essence of ordinary people:

“Precisely because, in one sense, he is passive to experience, Miller is able to get nearer to the ordinary man than is possible to more purposive writers. For the ordinary man is also passive. Within a narrow circle (home life, and perhaps the trade union or local politics) he feels himself master of his fate, but against major events he is as helpless as against the elements. So far from endeavouring to influence the future, he simply lies down and lets things happen to him….(he has a) preoccupation with indecency and with the dirty-handkerchief side of life… the truth is that life, ordinary everyday life, consists far more largely of horrors than writers of fiction usually care to admit.”

That magnificently ambiguous phrase of Orwell’s – ‘the dirty-handkerchief side of life’ – captures something indefinable, almost ungraspable about Miller. What Orwell valued above almost everything else was writing that was authentic, that spoke directly and without artifice and Miller fits that bill to perfection. Direct authenticity is, I think, what makes this book so compelling; a refusal to compromise tumbles from every page.

What is also true about Tropic is that it feels timelessly modern. Possibly one of the most astonishing things about the book is that it was written before the Second World War because in terms of sensibility and technique it feels much more like an innovative novel of the 1960s – which might just be a tribute to how influential Miller was on the later generations of literary aspirants.

I’m sure that this is a book I will return to again – although I doubt I can wait another thirty years to do that!