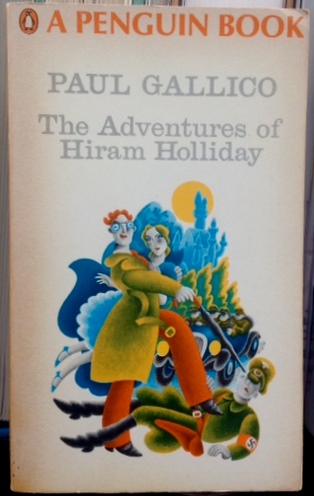 The author of this rather charming fantasy was often fondly dismissive of his creation, calling it a piece of whimsy that barely merited critical attention. But I suspect this might be a case of protesting too much – he was, after all, fully aware of the warm praise that has often come its way.

To be fair, this is at heart a good natured tale of chivalry dressed up in something that’s a hybrid of an old fashioned adventure yarn of the Erskine Childers or John Buchan variety, a dash of Walter Mitty and the more ominous Cold War thrillers of the 1940s and 50s. There is, however, no real attempt to pretend that its central character, Hiram Holliday, is any kind of James Bond – in fact quite the opposite. Holliday is a Mr Ordinary in appearance – slightly over-weight, bespectacled, unflamboyant and likely to go unnoticed in any crowd. But this ordinariness hides a man who sees the world more like a knight errant that a 20th century man and, quietly, he has mastered plenty of useful skills like shooting and fencing.

Holliday has a modest job as a newspaper copy editor and when, one day, his diligent work saves the paper a fortune, he decides it's time he made a visit to Europe for an extended holiday. But this is 1939 and what he imagines will be a cultural tour of Europe’s capitals and big cities turns into something quite different when our unlikely knight finds himself the custodian of a Princess and a child who is heir to a throne and a fortune.

The book is constructed as a series of episodes all linked together by Hiram’s quest to protect the Princess and recover the child heir from his captives. Each episode takes us to another country, starting with England and concluding back in America. But the journey is anything but a smooth one as he finds himself embroiled in the politics of a Europe sliding towards war. His footsteps are dogged by secret Nazi agents, Italian fascists and double-dealers of all kinds but Hiram has a secret weapon – his seeming innocuousness. Soon he is fencing with an umbrella, chasing a man  he assumes (wrongly) has a false beard, facing a potential death sentence in a German jail and skiing his way to freedom over a precipice in a series of unlikely adventures that would match any of King Arthur’s Knights of the Round Table.

And, of course, there has to be a happy ending and just the hint that this modest newspaper man will not only become a renowned foreign correspondent but will also win his Princess – because all fairy stories need a happy end.

The book, like Hiram himself, is huge of heart and decency – and very skilfully written. It’s easy to see why it was picked up by a television production company and turned into a long-running early evening series in America in the late 1950s – one that found its way to the UK in the 1960s. I am of the vintage to just about remember it as part of my tv viewing as a child – although in all honesty I can only just about remember the opening credits and not much else. The series was a vehicle for Wally Cox who specialised in modest, slightly comical, bumbling roles and this turned the character into more of a bumbling, farcical character than the Hiram Holliday created by Gallico. Hiram in the book has a thick seam of darkness that is being cunningly hidden behind an upbeat sheen of optimism by Gallico’s dazzling storytelling.

This was an unexpected treat and one you can find n paperback for not very much money.