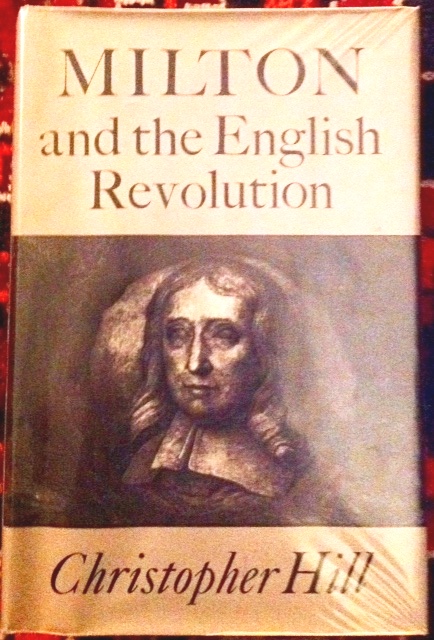 Milton and the English Revolution by Christopher Hill

Christopher Hill died at the ripe old age of 91 back in 2003 and it’s quite remarkable just how influential this Marxist historian was and still is – especially when it comes to interpreting the volcanic events of the 17th century and the English Revolution. Ever since I read The World Turned Upside Down, his seminal work on the radical groups that proliferated in that time, I have been captured by the way Hill was able to make the most complex ideas and interpretations accessible. Ever since then I have made a point of buying any of Hill’s books - but this one has been sitting on my bookshelf for a long time and remained unread. When I was shuffling and reorganising my collection recently it leapt into my hand almost demanding to be read – and so it’s turn had finally come.

As you might guess from the title of this book, Hill has gone for a blend of historical re-evaluation and literary criticism and both elements are fascinating. The starting point for the author is to challenge what he sees as the pre-conceptions and stereotypes that dominate the popular perception of Milton – both as a man and a poet. He considers the picture of Milton as a rather grim, stuffy, Puritanical and patriarchal individual and presents instead a man capable of enjoying life to the full and even fond of the passions typically associated with the young.

Hill’s central assumption is that to really understand Milton we have to also better understand the historical context in which he lived. As was commonplace in the 17th century, politics, religion and education were inseparable and led Milton to challenge the episcopal organisation and to reject what seemed an obvious step of taking up a career in the Anglican church. Instead he left for the more traditional 17th century ‘gap year’ in the form of the Grand Tour, returning just as the groundswell of tension was emerging that would result in the English Civil War. His discovery that Cromwell was a man who not only shared his views on religion but offered the chance of being part of significant systemic change, was a defining moment in Milton’s life.

Hill stresses the adherence of Milton to his fundamentally radical and revolutionary ideas even when the Commonwealth begins to fall apart. The underlying values that had fuelled the ideology behind Cromwell’s government were ones he would never recant. With the coming of the Restoration, Milton’s influence as a political figure effectively ended and the energy he’d invested in the public sphere found its expression in the work of Milton the poet.

Hill mounts a spirited defence of the relevance of Milton’s poetry and its position in the wider canon of English literature. Attempts to undermine the significance, scope and importance of Milton’s epic vision have, he insists been vanquished and his essentially humanist instincts infuse his work.

I have to be honest and say that this isn’t a book for everyone – especially if you’re in the market for a relaxing beach read. This is hard work  - but hard work that’s worth the effort even if, as I confess I did, you find yourself scan-reading some of the denser parts of Hill’s thesis. But don’t let what I’m saying put you off: if you have any interest in radical 17th century politics or in Milton as a poet or even just the historical narrative, then Christopher Hill’s your man and I’m pretty sure he wouldn’t insist that you read every word come what may.

Copies of the book are available on book order websites for something between £15 and £20 in both hard and paperback.