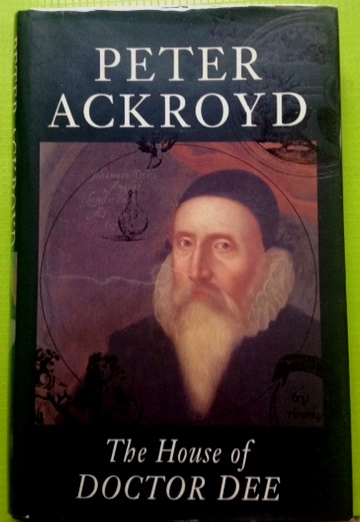 The House of Dr Dee by Peter Ackroyd

“Dr. John Dee was one of the most fascinating characters of the Elizabethan period. The events of his life are filled with science, experiments, astrology and mathematics which he aligned with magic, the supernatural and alchemy. He was fascinated by the 'Dark Side'.”

Dee has an almost mythical status amongst those fascinated by the ideas of alchemy, supernatural practices and astrology and he exemplifies the way in which science and magic were almost symbiotically combined in the Renaissance mind. So I guess that it’s not really a surprise that his colourful life and ideas are a source of fascination to novelists who are keen to explore or be associated with the mystical aura that surrounds his name and reputation.

Peter Ackroyd’s The House of Dr Dee also capitalises on Dee’s exotic reputation but, I must hasten say, this is no gratuitous pot-boiler cashing in on the more lurid rumours of Dee’s dabbling with black magic. What we have here is a genuine attempt to explore the nature of time and the inter-connectedness of existence all wrapped up in story that is part love letter to London and part historical novel.

This is very much a book where I need to tread carefully in terms of potential spoilers – especially when it comes to the final third of the book that builds to its almost hallucinogenic conclusion – but all of that unfolds as something of a surprise given the almost pedestrian first third where two parallel storylines, one modern and one historical, appear to progress along their separate paths and seem only to be linked by the sense of place. In fact the role of London in keeping this first section united is crucial and the city itself emerges as a living character in its own right. In fact, like Iain Sinclair, Ackroyd is clearly obsessed and fascinated by London and its history – he writes about it with a depth and passion that at times is deeper and more penetrating than the life he conjures for his human characters.

The book opens with Matthew Palmer arriving in Clerkenwell to find the house that has been left to him by his father. The house, we know from the beginning, is unusual; an odd pile almost hidden away in plain sight and clearly much older than the buildings that surround it. Matthew’s sense of unease about the place starts from the moment he arrives and his hunch that there’s more to the house than meets the eye grows as he encounters sounds and sights that are not quite substantial enough to pin down.

Ackroyd then opens up a parallel line of narrative told through the voice of Dr John Dee, his great years behind him and living in Clerkenwell. And, yes, as you might guess at this point, he is living in the same house as that which Matthew in the contemporary storyline has inherited.

Ackroyd then develops these two story strands – the contemporary and the historical – in ways that begin to suggest parallels between the two men. In their own times the discoveries both men make about their families and friends suggests that the timelines keeping the two men apart are drawing closer together and that in their very different ways and for their very different reasons they will find a way to reach out across time and communicate with each other.

And that’s all I’m going to say about the plot development because you’ll want to unpeel this one for yourself.

Ackroyd can, I think, be a slightly infuriating novelist who refuses to be bound by usual conventions of time, place and story development. He’s also hyper-sensitive to location and to the organic nature and history of his beloved London. Thankfully this book has enough heft and strong enough voices – especially that of Dee himself – to carry the experimental elements of style and structure. But I know this wont be to everyone’s taste and you will have to do some work in the last third to keep on top of what the tale is telling us about the nature of time, the human experience and the heritage our presence on this planet leaves behind.

Paperbacks and hardbacks are not expensive on most second hand book sites so you can experiment without fear of overspending.